Day 2 at Affiliate Summit is the day of the Exhibit halls and when the majority of people are at Affiliate Summit. After taking grabbing a protein shake and some coffee, I headed towards to the exhibit hall with Carl Zetterlund. I met up with a bunch of the networks, such as Azoogle, Neverblue, AKMG, CX Digital, Clickbooth, etc.

This year the booths seemed they went all out, one of the more favorite ones and the place to hang out was Convert 2 Media’s booth. Ruck and Steve know their affiliates and definitely know how to do it. They had a bar, literally a full blown bar, wish I took a picture of it. But view it here >> (pic via Rohail) But they did have an awesome shirt in dedication to Billy Mays!

The exhibit hall was 2 floors, which I think confused a hell of a lot of people. Downstairs was always super crowded while upstairs was super empty. 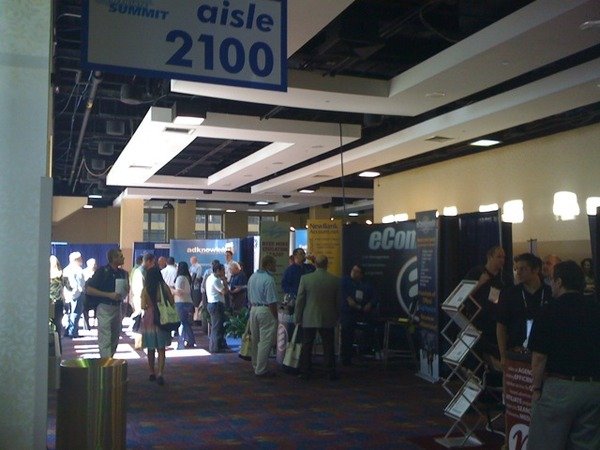 I met up with a bunch of people and found a new advertiser in which I was looking for! Also met up with Direct Agents and my fav AM. Talked to Ken and Francesca and just chilt at their booth for a bit. After doing a quick browse, I bumped into some of my meetup202 NJ people and just hanged out and talked.

Soon it was lunch time and Ad Hustler and I decided to walk to the corner and have some chicken and rice, it was hella good. After a good lunch we hanged out in the blog room for a bit where it was nice and quite and relaxing. After a bit, we headed back to the exhibit hall to chill with Convert 2 Media.

The best part it was all ours, no one was down there. Very exclusive.

Eric and Brittany did it real well especially with the food. The portions were huge, the menu says 2-3 people. It was more like 4-6 people. I assume the cooks were going to feed big Italian dudes cause the dishes were just hella big. It was also my first time meeting Drumming Logan, as I read his blog.

After the dinner it was a beer pong party at Havana Lounge. Definitely not a beer pong type of guy or a beer drinker, as Logan can tell you. I met up with eBay and discuss a bit about EPN, but it was loud. I also met up with cousin vinnie at the lounge, in the end I started to talk a cab to Touch where Biz Markie was performing just 1 song, weak.

Upon arriving to Touch there was a huge line, I just hit up Adam and got in with ease. I met up with Jason Ventures, Glenn Pagan, Robert Adler, Market Leverage, Neverblue, AKMG, Jasper P, and everyone else I forgot.

But chilt with Elite Profits most of the night and did it baller status, heavy flying.

After getting my drink it it was time to do some 2 stepping up on the dance floor. I just had to do it on the floor. After a bit of just 2 stepping, my glass was empty and Neverblue got me up on stage with their private area and we sky high’d the place. Then it was back on the dance floor.

After a bit I decided to meetup with some more people and walked upstairs to the exclusive, VIP. Glenn got me a wrist band to be upstairs and we were out of control. I met up with Wes Mahler and Roland of Tracking202 and just did it big.

After a bit the crowd died and a bunch of us decided to go to another bar. Met up with Max and Slightly Shady as well as other who they were hanging out with. I decided to just chillax for a bit and chit chat with everyone. In the end I was tired and I just wanted to fall in bed.

Luckily the bar was next to the London hotel and I just walked down the block.