First of all I have nothing against Mike, as he has some great products. I personally LOVE affiliate marketing since it has helped me learn more about marketing online. I am going to break down Mike’s new system and show everyone that the network isn’t worth joining

He claims to solve a problem but he really isn’t. I will also show you that you can start affiliate marketing at little or no cost or even cheaper than his monthly plan. The reason why I am doing this is because I feel Mike wants to help online marketers, BUT his new system isn’t doing that, only taking advantage of them.

Again, I love the affiliate industry and I can’t believe that this is really happening. Again I have nothing against Mike just this new system he has out is a definite scam.

AffiliateJump is a new CPA Affiliate Network similar to the ones on this list. What Mike wants to solve is the problem of affiliates or publishers that are being denied into an affiliate network. His new network says he is solving this problem by accepting all who wants to join his network regardless if you have a site.

The funny part is that he charges to join AffiliateJump. Let’s think about this for a minute. Affiliate Networks are filtering out users because our industry is base on performance. So obviously networks want to get people who understand or some what understand what the industry is about. Networks are even taking in users that are total noobs and turning them into profitable affiliates!

BY charging someone a monthly cost to join a CPA Network means Mike is also filtering people that ‘have’ money or that can afford. So ‘accepting’ all and everyone is not solving his first proposal “accepting all affiliates’. If you are trying to solve that specific problem why charge them? By charging users you are still filtering users.

This to me was the first wow. A lot of people want to make money online and affiliate marketing is one f the easiest way to do so with out any startup capital. So Mike is asking noobs to give him money to just join a network.

The pricing to join the network is absurd! 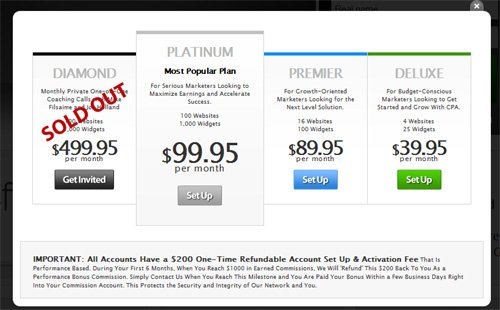 These prices are ridiculous! Why in the right mind would someone do this? Pay a monthly cost when in the beginning you are not making any money with affiliate marketing?!  The cost seems to cover hosting and ‘technology’!

Hosting is super cheap! Technology? Does he mean tracking? If so Tracking202 is FREE!

Domain issues, I personally see this being an issue with Google Adwords. your domain will be so long its going ot look so crappy on an adcopy. Honestly.Since AffiliateJump hosts your website, they can charge for that and that part I understand but…

I can say right now 99$ is an investment in an affiliate tool not a network. AffiliateJump states you can quickly make a site and have them host it. So your domain would be somethingdomain.morestuffhere.com

Wouldn’t it be better to buy somethinghere.com instead if being a subdomin? Also the hosting cost just 6.95$ a month via BlueHost.com!

With Google Adwords subdomains are cool, but if your domain is super long it will look shitty and your CTR is going to be crap. If it is crap then your ad will rarely be seen and you are not making any money. Plus not a lot of people online like subdomains. It look like it use to be an old angelfire site or geocities site.

Lowest friggin payout. I watched the video, Acai Burn on AffiliateJump is 20$ payout! That isn’t even street value!! Let’s be serious! Acai offers I have seen are ranging up to $42 per lead! SO here Mike is probably taking a huge cut from the advertiser!

Now the offers I am not sure if they are really going direct to the advertisers. I do not see an advertiser signup link on his site. Where are these offers coming from?

Affiliate Theme is a great tool that basically gives you a ton of options to make multiple affiliate style landing pages! You customize it the same exact way AffiliateJump does, but you have more options. I personally use Affiliate Theme.

Limits on his subscription. With it being paid there are limits, for example you can only have X amount of sites per level of subscription. Again why? Obviously it is being self hosted and I understand that part, so you have to pay for it being self hosted. I would have done it by bandwidth. My reason is because 90% of affiliates rarely push any huge volume to a site.

There are way too many networks out there. Just take a look at this list I have generated – List of Affiliate Networks. If you can not get into one join another. Also does AffiliateJump even have affiliate/publisher managers/strategists?

I personally learned from my Affiliate Manager on how to get started with affiliate marketing when I first started. I do not see AffiliateJump having access to this? to any tutorials? private forum?

Again here are resources that will be cheaper than AffiliateJump or will be a better investment.

So just think things through before join AffiliateJump. I personally think this is a wasted attempt at an Affiliate Network, since the cool thing to do in our industry is create affiliate networks. All networks accept a good portion that want to make money online. Networks even literally help their affiliates make money! So I am not sure why AffiliateJump is being added or called an affiliate network when you have to pay to join and has the lowest payout which isn’t even street value.

Again, nothing against Mike just this new project is crap. Again so many other networks and there are so many tools to invest your money in.