Early last week I was thinking about trying to see if people or my twitter followers would be interested in users that are leaving comments on my blog. Creating more interaction and bridging the social community from twitter, facebook, and my blog.

As you know I auto tweet my new blog posts to twitter, which happens one time. I also thought certain followers may not be that active at certain hours of the day. So I figured if I post my comments to twitter, there would be a great deal of visits and interaction. So I basically just grabbed my comment rss feed and inserted it into TwitterFeed.com ti ping every 2 hours and post any new comments within those 2 hours.

Well I did a case study on this and found the results to be interesting. 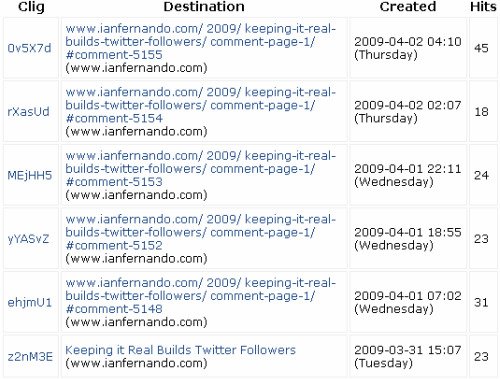 It isn’t much traffic as I expected less than 4% out of my 1000 followers per link generated clicked through. Also there wasn’t much interaction within the comments of the blog post, which was my primary goal. I wanted to create more interaction between social networks and my blog, fail.

As you can see from the image above, the initial post only received 23 clicks, but then after received a total of 141 clicks. Not really impressive I think, especially when I was trying to accomplish something.

Also, since I sync my facebook account with twitter, they also show up on my facebook status. I personally also got annoyed at the fact that it was on there and filling up my facebook wall, if I was annoyed others were too.

The others were not afraid to tell me either. I respect these guys for just letting me know how it is, which is good feedback I think anyways. @lenstrom and @nickycakes basically just told me it was annoying.

So since I didn’t accomplish what I wanted with my case study, I have removed the auto commenting from blog to twitter. Though it seemed like a good viable way to use twitter day parting and seeing what time of day you get more responsive tweeters. But annoyance is annoying, it even caught up to me.

So I have removed the rss feed for my comments from TwitterFeed.com and everything should be good now. I am still going to sync my Facebook status with my twitter though, might do a poll on that as well.