The expo hall opened up and the keynote also started early, I actually was late for my first meeting of the day and missed Gary’s keynote, well I got the last 10 minutes. I met up with Anthony Dinh and decided to tour the expo hall after the keynote. I met up with my AMs and talked to older networks which I was doing volume with. I also had meetings on my new project which I gave the requirements to base on their API and also demoed the new system to the networks. The networks were very interested and I can’t wait to actually put it into beta testing for users to play around with.

While at the expo hall I met up with all my Affiliate managers and touch base, I also talked to some of the media buy networks and how their network differs from others. There wasn’t anything new really, but just talking to my AMs and seeing what other media buying options are out there.

There were several events during the expo hall and I rarely went to any of the sessions. I was just tied down with meetings and more meetings. During the day I met up with Wes from Tracking202 and he hosted a small Meetup202 at the conference, great to see other affiliates from the meetup around the globe.

After the convention was beat and headed back to the telly to relax and get ready for a dinner with NeverBlue. We ate at Daniel Boulud and the food there was great, not sure if you have seen my tweet about it and the pic but it was good. It was good that I wanted desert. I talked to my AM Rami and how we can better communicate and send more volume. We also talked about new offers and where the industry is taking us, it was good to have an intimate conversation with my AM about such things.After dinner it was off to party once more, gosh I am beat by this time. CX Digital hosted their billionaire party and it was very entertaining. Below are some pictures of me busting a move with a party girl and pimpin it out with women with body paint. The suite was held at the Palms and I met Chad from CDF Networks and we talked about my progress and what he was up to lately. I also met up with Ms Danielle and the Unique Blog Design Team. Great to see Nate party hard!! I also played blackjack for a bit and definitely lost. 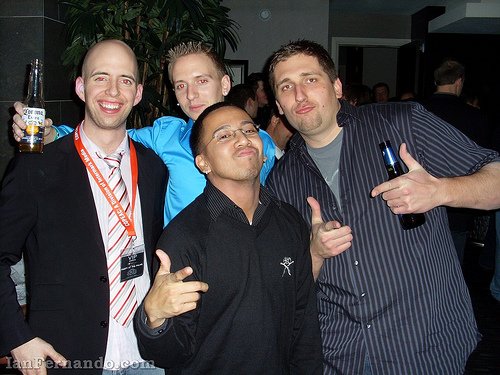 After CX we went a couple floors higher and pimped out at the Copeac Party. The Copeac Party was slow at first but later on became real interesting, real interesting, really! I met up with more people and chilled and talked to ShoeMoney for a bit, NickyCakes, BarMan, Bankaholics, my brother Christian at XY7 and many others. It was a bunch of networking and talking to people that make money online while having fun at the same time.

After the party I was hella tired and people still wanted to hit up the club, I was beat and knocked – I went back t the telly.