Yesterday we had a nice BBQ for the meetup team of New Jersey. Since it was becoming a nice week in NJ Benny and I decided to throw a BBQ202 to start off the summer. Benny was the host since it was held at his house and got the grill and food. Plus he had a really nice backyard to move around.

I got there early and met up with Ad Hustler. We got there and we started to update ourselves with our stuff and what we were doing. After that we went to shop rite across the street and bought some food. The funny part is our shopping cart stopped at a pre determined spot in the parking lot which prevented us to go any further with the cart. Interesting concept. 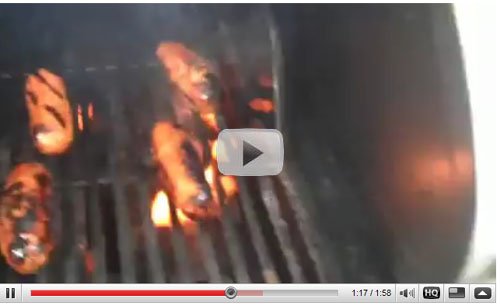 Again, BBQ202 is made possible by Meetup202.com – if you want to start your own meetup in your location definitely visit Meetup202.com. We had a good amount of members that attended, but I believe more would have came if the weather channel didn’t like about the weather. It was nice and sunny yesterday, but weather.com pose a 30% chance rain. So it may have intimidated other members to come. Overall we had a good turn of events.

Benny brought out his mac pc and we were tuning into ppc.bz anthem while grilling on the grill. Everyone brought some great foods and we def had more than enough food for everyone. Some of the meetup members bought my latest product Twitter Snipe and I was going to get their video testimonial but had forgot to, gah.

We also talked about traffic and generating income. We had a big discussion over twitter and where will twitter be in the next couple years. It was interesting to see others feedback on where and how they may even control traffic and followers.

Other topics we discussed were other sources of traffic that I have been testing and my results. Where else to advertise, what to advertise and what offers to chose. I talked a great deal on trends to someone and how to take quick advantages of it.

Overall it was a great meetup and def want to thank Benny for having it in his backyard as well for the others that have attended.