The other day I went to NY to head out to the Meetup202 NYC. I decided to hit up NYC early during the day and meetup with some networks that are in the city. I met up with 3 networks and it was a hella busy and tiring day for me. But it ended up well.

First I went off to visit Pulse 360, they are a CPC and CPA network. I met Daphne at Affiliate Summit West and had lunch with Dan, another member of Pulse 360. We had a really good conversation about their network and how they want to expand. They definitely picked my brain about it.

It was interesting to see that they are starting a network as well, outside their CPC platform. If you have ever seen ads on MSNBC then you will see they are distributed by Pulse 360. 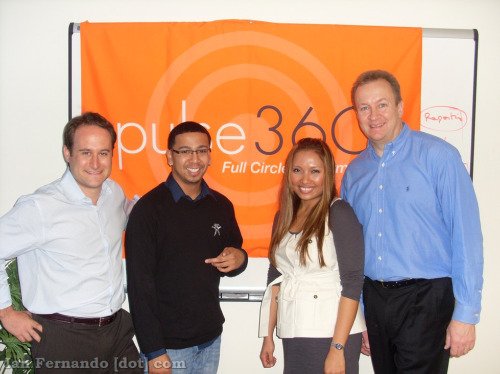 I went up to their office, which is one street down form the Hilton where Affiliate Summit NYC is going to be located this year. So it was an easy walk. I met the team of Pulse 360 and got a mini tour of their office. I had a good talk with the CEO and talked about Facebook advertising.

Then I visited Daphne’s little cubicle and just hanged out. I also talked to their development team and I discuss certain features that are necessary in an affiliate network and what to expect from affiliates in general. So it was good to help out and give my input knowing they are taking it into consideration.

After Pulse 360 I met up with 2 other networks which turned out to be a real good day and then of course the Meetup202 the same night.