Late last night I got back from the Oklahoma Meetup 2010. Honestly, I did not expect to have fun at all in such a state. Looking back at it, I learned some good stuff from people that attended and I hanged with. The 2 days that I was in Oklahoma turned out to be very entertaining and a good collaborative learning experience.

We had some crazy good beef for lunch and a very spicy BBQ sauce. I met up with Riley Pool and some other affiliates in the area. There were some affiliates that drove all the way from Dallas, Texas as well. It turned out to be a great event. 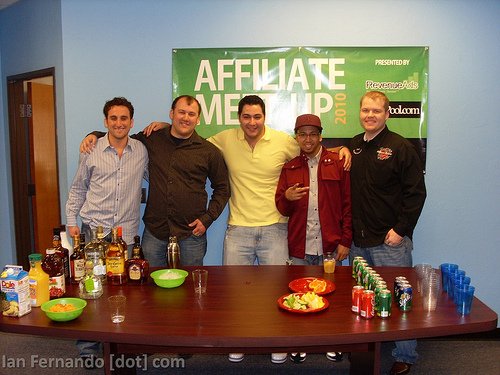 Later, Murray and I presented to the attendees of the meetup. Murray spoke about ‘high volume email deployment’ while I spoke about finding a niche and finding an offer. Each presentation was about 30 minutes long and we answered question at the end.

To see my presentation slide, you can find it at my Scribd account here.

After the meetup we just hanged out and networked with everyone that attended. Later we had a party bus come along to take us to dinner and take us around town. We ate at a place called the Boulevard which had some really good appetizers and steaks. Mike Pacheco of Ndemand had a dinosaur thigh, while I just had a 7 ounce. BIG difference. Good food though.

Back on the party bus we all went bowling and let’s just say it has been a while since I bowled. But I caught on and got the feel of the lanes that one of the affiliates wanted to sponsor me because of the ‘cursive’ I put on the ball.

After bowling, we all went back to the office. It was still early and I wanted to hit out the city for a bit longer. So Rusell Parr and I went out and decided to see what the city has to offer. We decided to hit a club/bar which was really good.

The only difference is the music was a mix of hip-hop and country, interesting combination. We then saw Dylan of RevenueAds and hanged with him till the place closed. It was still early so we started to hit up everyone that we met today and try to see what everyone else was doing.

We tried to meetup with Kevin of XY7 but everyone closed at 2pm it seemed everyone called it quits for the night.

The next day we had lunch with Ndustry Clix and Kevin at a pizza spot. Since I am doing the P90X workout, I decided to have a salad. I had way too much meat the day before. The salad was good…

The craziest part is there was a high alert of a snow storm in Oklahoma, but the day I landed it was beautiful! It was so cold the snow touch the ground and turned to instant ice. Well, it didn’t matter much since we were inside watching the NCAA game.

We watched 2 games that were being played and it was a very close and good game, both of them. The interesting part of the whole night was trying to drink. At the event no one was allowed to drink when the ball is in session, that is is a first for me. So it was interesting to see cops tell everyone to down their drinks.

After the game we all went to a crab-fest restaurant, where they steam all the seafood and just dump it on the table. Riley, James, Kevin and I destroyed the food. Nothing was left besides onions and shells. It was some really good seafood.

The game was really good and being filled with good seafood that everyone was tired ass hell and we called it quits around 11pm. Plus it was too cold out to even go out and hit the city. I definitely didn’t pack well for the confusing weather in Oklahoma.

Sunday, yesterday, we just had one last congregation about online advertising. Very good stuff. Kevin and I exchanged ideas about advertising.

I want to thank NDustry Clix, NDemand, RevenueAds, Revenue500, and Riley Pool for having such an event. I honesty didn’t think I would have had a good time but I did.

Video of what happened in Oklahoma.

[youtube]http://www.youtube.com/watch?v=8hNMdN9HikY[/youtube]
Sorry, I turned comments off - Read Why - Send Me a Message Instead