After reading NickyCakes post on Reddit launching their self serve ads, I wanted to test it out. I wanted to test it the day he posted but definitely was way too busy with mad ish to even start it. So I recently tested it out and after testing it out I learned a couple things from the traffic.

If you understand these social bookmarking sites, you can guesstimate what to promote to get the readers attention. I assume the users of reddit are smart users, tech savy, modern day internet users, etc. So as Nickycakes states, they won’t be all about the acai berry stuff.

But anyways I want to just show you my ad and the result that came from the traffic. I promoted my recent project Social Snipe with a $40 spending over 2 days. Below is my ad that went live on Reddit.

I wanted to attack a specific demographic on Reddit, Myspace users, more specifically music artists that are trying to get their name out. The ad was very specific as you can see from the screenshot.

BTW the setup of creating the ad was literally too simple and very easy. Everything is straight forward. The only thing that was odd is the fact that I had to php redirect my tracking link. Just because.

A good portion of the users were FireFox users, only a specific time frame were my ads very active, the bounce rate was high, time spent on the site was low. So these things tell me that most just left the website, while a very small portion stayed to check out Social Snipe. I have another idea how to keep them on, that will be another test I have to do.

One thing I like about Reddit ads is the hourly stats, even though they state their will be a 20 minute delay when receiving stats. Not sure if that is when they first serve your ads or every hour when your ad is live. But anyways their hourly reporting is interesting and you can literally see when your ad is most active. 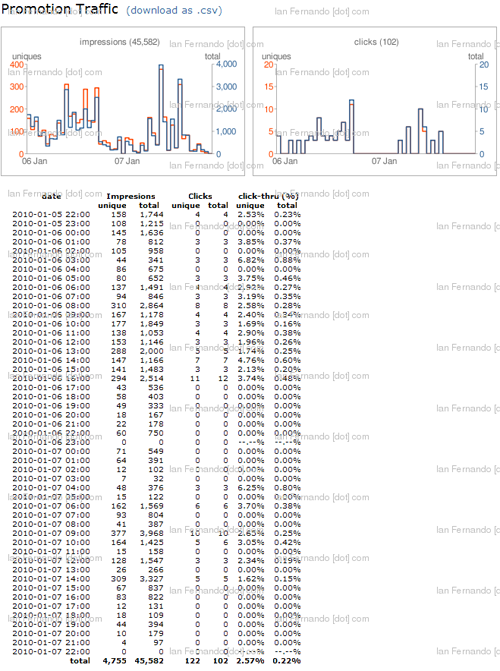 You can see and tell there are specific hours of the day where my ad was pretty active and when  got my clicks. Again there was no conversions, no signups. When I did some research on reddit to see if anyone tested it, I found Gyutae’s post on Winning the Web about his case study. He too received no conversions. So it almost lead me to think that it wouldn’t work but he did the same thing I did with his test, direct link to his site.

The interesting part is I would get a signup but it wouldn’t follow through with a payment so I need to understand why? It has happened before but when I advertised on Reddit it did increase. I am not sure why, I have to read more stuff about signup abandon rates and all that jazz.

My bounce rate was very high… according to Google it was 92.86% with an average visit of 1.98. So that tells me they saw the page and just left without exploring. I just sent them to the homepage of Social Snipe, which may have been a mistake.

From the stats I received I have a way better understanding of how the users interact, the demographics of the community, and who clicks when. So I def have another idea which I want to test out, which I think will result into a conversion. I just have to test it and take the time to do it.

I tested Reddit Self Serve Ads on a small scale, saw the stats I needed to see and now I have a better understanding of how to react and adjust on my end. Have you tried Reddit Self Serve Ads?? Try it out, it’s a quick burst of traffic targeted to a more specific group of people. If you have tested it out let me know your results.