I was going through my Flipboard app on my iPad and found an article from my twitter feed about Google+ as an extension in Adword ads. I was reading the article and it says you can activate social extensions on these ads. First of all ads are ads, they are a direct response advertorial. The image below you will see Google+ buttons on these ads when you are logged into Google.

Honestly, I can only see this working as an influential factor and not an action to be taken prior to a click. Also, this becomes a factor for us marketers we have to consider. Instead of a direct click the end user may click on the button rather than the ad? It is a distraction! 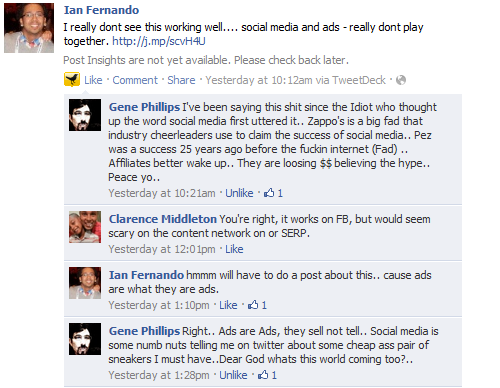 I do not understand why some people think social media plays a role in advertising, it doesn’t. Direct response is not social media. Just from my statement and from Gene’s response – Ads are Ads. Why would you click like, retweet, or even google+ and advertorial? There is even a company which thinks the end user will actually save these ads to their portfolio for later viewing, AdKeeper – really?

The purpose of marketing or advertising is to get the end user to click and take an action whether if they are buying an item or filling out a form. I can not see a person Google+’ing an Adwords ad. What is the point, really? Is Google trying to replicate Facebook Ad Likes?

From another view, it can show user influence. If the site has received prior social shares, then it may help but adding it directly to an ad proves useless in my opinion. Also the audience of Google+ users isn’t huge. For Google to incorporate such action is just trying to compete with Facebook social likes.

Social Media as a whole is not meant to be for a direct response industry such as affiliate marketing. It is meant for just branding and social interaction. Why would a person decide to like an ad? We have already tolerated banners so much they are blind to us, hence banner blindness. So the purpose of a social button being added on a banner or any type of paid media doesn’t really make sense.

To advertisers, by setting up social buttons on your ads, it just will create a new barrier or a new deterrent to the end user. Your goal is to get the person viewing your ad to click and then to convert. Not to share an ad. Does that even sound right? Facebook has done a good job with their platform because it is within their services. More and more users are utilizing Facebook pages to create landing pages, a community but not a direct response campaign. Two different things.

I will agree that social media is good for influence and viral traffic. Incorporating it with ads, definitely does not work. Again would you like an ad? retweet an email submit page? or Google+ a male enhancement product? Probably not. Marketers that think social media should be use in all aspects, I believe do not know marketing in general. They are just going by the trend and what is becoming popular.

The internet is becoming more social but it does not change how direct advertising works. A direct response campaign is just that, allowing the end user to take an immediate action and not share a new lost weight pill they have found so interesting.

What are your thoughts on social media and direct ad campaigns? Even the addition of adding Google+ to Adwords? 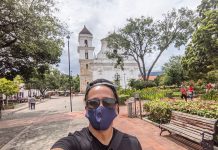