I think it has been a little over a month since I installed the new Google Adsense block, 300 x 600. So far, I haven’t earned boss money but I did earn some cash. The ad blocks were interesting to see what Google would put on my site base on the content and I can tell most of it were retargeted ads and some banner ads base on the post.

I have some pretty interesting stats to share with you about this new ad block as it does take up a lot of space. Also Google seems to also be testing their ads to help with increase CTRs as well.

For example take a look at this image below: 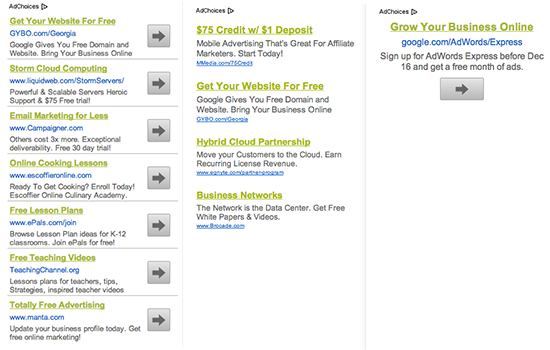 These 3 styles are what I have been seeing on my personal blog. I have seen banner ads and drop down style ads within these ad blocks as well, these 3 are the most common that I have seen through out my own website. These blocks are getting pretty popular as they are on most news sites and social site, Mashable seems to favor this a lot on their old design.

What you will notice in the first column is the grey arrows with a horizontal line separating the ads. In the second you see the traditional text ads without the button or line separation. The last column shows a bulky ad with a button below the text ads, for I want to say optimal viewing. Again there are other styles that were being rotated in such as a dynamic dropdown style, where you click on the actual heading and the text ad shows.

I first heard about this new style on Rucks and Ryan ImGrind blog and decided to test it on my blog and several other content sites I own. Interesting to say I have earned some cash! This is for the last 30 days.

I basically replaced the 125 by 125 buttons on my sidebar and added the new Adsense block to see if I can earn some money through clicks. Since this blog is ranked for a lot of high term keywords, I get a lot of natural traffic. I wanted to see if those natural clicks turned into Adsense clicks and I guess it did. The CTR on my ad block is pretty good comparing it to Facebook traffic or banner buy traffic.

To say the least I am not an Adsense expert and I know there are  a lot of tweaks I need to do such as color adjustments, maybe moving the ad block higher on the page, border testing, etc. There are a lot and I don’t think my effort and time is worth the change I am receiving. For now I am going to leave it at bay and see how it progress over the months. If I get bored one day maybe I will test with the other variables to help increase my CTR on the ads. Overall I think it is doing fairly well when it comes to Adsense clicks.

Now the blog makes good money that it pays for my mortgage and then some, it is all via affiliate income and ranking in the serps. Adding an extra 25$ a month isn’t going to make me ball out of control but it is just extra income I wasn’t making. I have added this to several sites and I have monetized my youtube channel as well and already it makes just over 220$ a month collectively. Adsense isn’t my main source of income but it is a source.

I am just taking advantage of a space on my blog where I wasn’t making 25$ a month on it.