The past 2 days was Ad-Tech. I honestly was not going to attend this years ad tech west in San Francisco just because I didn't want to really go. But since I was in Cali for a while, I decided to go ahead and go. This years show was really really good because there is a lot of traffic sources and venues for marketers to venture into. 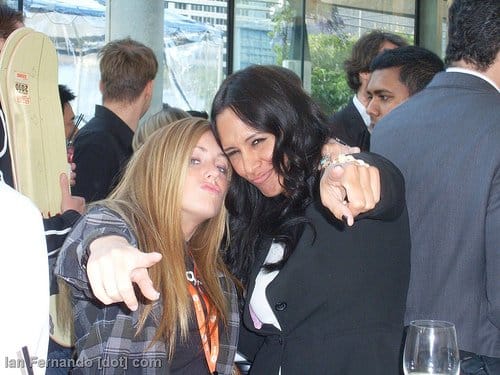 I met up with some great readers of the blog as well as past internet marketing friends such as Joel Comm. I flew in Tuesday and chilled with some people prior to heading to ad tech. I then started snaking the show and talked to a lot of people. During most of the day I was at ad tech I just had beers all day at the beer garden and while walking the floor.

I met up with Dustin, Bryn, Silver, AffBuzz, Jonathan Volk, Charles Ngo, Morgan, Nick Mattern, etc. It was great seeing these guys. I also decided to have lunch and celebrate the 1st year anniversary of AffBuzz. Everyone that reads AffBuzz was there.

It definitely was fun. I had the chance to talk to a couple people from the Irvine meetup and talked to Volk about ideas and marketing in general. After the celebration I headed back to the conference and walked the whole thing again.

The show was a good and great hit. One aspect I did not like was un-knowledgeable people at the booths. I think they prey on stupid and naive users. Even one of the biggest platforms didn't know what they were talking about. I walked to the Facebook booth and asked about quality issues and how they do quality scoring...

The reason is because I got a daily spending limit on Facebook ads.

I asked away at the Facebook booth, but this girl did not understand what I was asking. I want to work with them and better understand their QS platform and how it is being judge besides the obvious (CTR, Spending, Voting, etc). The girl didn't understand or even had a clue they had a user base voting system... sighs...

Well anyways that night the parties are all the talk by the end of the show floor. Everyone basically had their mind set either at the PPC.bz/EWA party and the Clickbooth party. I went to PPC.bz first and chilt there and had a great conversation with Pulse360. I met up with Ryan Eagle and Barman at the party as well as other affiliates in the industry.

After the PPC.bz party I went off to hit up Clickbooth's party. I met up with old friends from past conferences and just hanged out for a little bit. After the last drink of the night I decided to call it quits. I been drinking all day during the conference and I was beat. I literally just walked back and took a cab back.

I simply just met up with people I needed to meet up with and then hanged around the show floor. I found a cool twitter analytics system called Tap11 and got more information on Twitter advertising called 140Proof. I do not know why but social traffic and twitter stuff amazes me, since its conversational data that is being researched.

I really didn't do much I was trying to recover from last night. I basically just hung around till dinner with a couple friends and then met up with Wes Mahler himself! I was beat as hell and decided to call it quits for the night and day.

Ad-Tech is a great show to find new sources of traffic and branch out into other venues of marketing. Since the issue I had with Google and Facebook I am branching out into new venues and traffic sources. Ad-Tech is a definite show to go to... I might have to hit up Ad-Tech Japan soon...