Affiliate Summit is a great place to meetup with a lot of new people and ofcourse the peers of the industry. Day 1 of Affiliate Summit East NY started off with me waking up a bit hungover as the prior night was the buy.at party and the Wicked Fire party. Which was entertaining, but glad I was able to finally meet Eli of Blue Hat SEO.

But Day one got me a bit pissed since I missed Chris Brogan's keynote. So instead I made it to the meet market which was very busy and hot. I did a quick run around and then decided to stay in the middle of the meet market and just hang ot with Ad Hustler and Bryn.

We had fun just chillin and drinking and had people walk up to us. We were also having fun messing with som of the people at Affiliate Summit. Also if you already do not know, the official Ad Hustler t -shirt! Thanks bro. 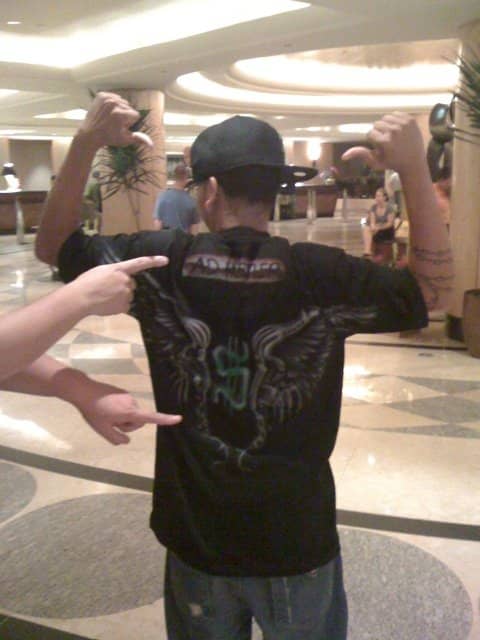 After a bit of hanging around. I went back to the room and just relaxed, I could already feel my voice going. Plus I had to get ready for the IANteract Dinner tonight which is proudly sponsored by Elite Profits. The dinner is something I do every Affiliate Summit because sometimes parties is not a good place to network and I get to target people I want to network with.

The dinner was amazing but the service was a bit slow. I invited a nice group of friends and people I want to network with and Adam from Elite Profits brought his team as well. He even brought a model to the dinner to add some flare to it as well.

The dinner was great and definitely did the John Chow and tweeted some pics. At the end of the dinner Adam surprised everyone by giving everyone a bottle of Dom Perignon! I definitely new about it and Adam and his network did a great first impression. Again I want to thank Elite Profits for sponsoring the dinner on such a short notice.

After the IANteract Dinner, some of the guys went off to do their own thing and the majority of the dinner ended up at the Share a Sale party where it just got even more baller status. I got to meet up with past friends from past summits and see new ones. It was a crazy night because Brian Hawkins from Pingo.com ended up being picked up and flipped upside down! Crazy!

After the Share a Sale Party, a bunch of people started to go to a private party at the London, which was pimp. The suite was a definite chill spot until everyone got kicked out because of noise. Other than that everyone was cooling and I met a lot of new people from Pinnacle.

After that I decided that I drank too much and walked back to my room and knocked the fudge out.