Have you checked the Affiliate Summit recap Day one? or Day two yet? Well check them out first before you read this one… but Affiliate Summit is a must go to event if you are in the internet marketing space and more so for the affiliates.

My day 3 started off with going to the blog room to catch up on stats. I then ended up going to the keynote by Brian Clark. Some good points… one point he made was that the days of ppc are over… hmmm guess he hasn’t really worked with Google straight forward. But I find that comment hard to believe.

His keynote was more about content and how content creates the traffic, etc. He described content can be in any form, music, audio, video, etc. How content is portrayed drives the traffic and the demographics for your offer or site.

I just don’t think PPC will ever die. 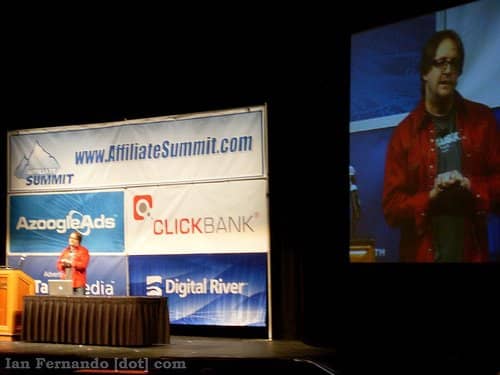 I had to leave the keynote early to meet with an advertiser to discuss some aspects of my landing page and see how to be more FTC compliant. It was a really good meeting, got to talk face to face with the advertiser.

Next I had lunch with Pulse 360. I worked or tried to work with them last year but really didn’t like their interface. So I talked with them and we had a really good conversation about the future of Pulse 360 and what is expected in the industry and how I attack my traffic. They also got to me on mobile advertising, since I use to do mobile traffic a couple months back.

So that was a really good lunch and I def want to retest their interface and traffic again.

Then I went and headed back to the show floor and chatted with the new connections i made prior to strengthen the relationship and just chit chat. I also was very interested in this marketing platform called Bevo Media. It is almost look like a mockup of Tracking202 pro but I think it has some really good potential. They got a lot of big plans and I def am interested in what they have to show for.

I was part of their beta back in the day and I really didn’t get it until now. I talked to Ryan about it and questioned a couple things and he has a lot of great plans for it. So I am going to hit him up about it.

After the last tour of the exhibit hall I bummed out in the hotel room and relaxed till dinner time with another client that I work with. We had it at the Voodoo lounge. I had lamb that night and it was damn good, right after that I chilt with Eric from Clickbooth at their blogup.

Def great seeing bloggers and affiliates. Pretty strange that their were more people on the CPS side. There was also some crazy talk about a specific person but I will leave it at that. I had to made sure they knew what he does and he is for real. Other than that the BlogUp was coolin and relaxing. I got to meetup with some bloggers and talked to Eric throughout the night.

Later that night I metup with Qwik Media and we balled out. They were staying at the venetian and I met up with Harry and Victoria. Love meeting up with Victoria she is hella coolin. It was my first time really hanging out with Harry but the night turned out real well except for the last minute.

But other than that we took a limo to the club and it was all game on from there. Here are some pics…

So Affiliate Summit is a show you def need to go if you are in the affiliate marketing space. You need to attend this show. It is the only show I love and always recommend. If you are just starting out you need to go, if you are bigger than a baller you still need to go. It is about creating relationships, strengthening old ones, and connecting.

People will learn from you and you will learn from others. I am always leaving affiliate summit with something new. New partnerships, new ideas, new traffic sources, new friends, etc.

I want to thank Shawn Collins and Missy for having a great show everytime!

BTW… here is a mashup video…

[youtube]http://www.youtube.com/watch?v=dMVvqWJAigE[/youtube]
Sorry, I turned comments off - Read Why - Send Me a Message Instead