Azoogle was one of the first affiliate networks when I first started with affiliate marketing. Yesterday they held another publisher appreciation day for their affiliates. I was at their office last year and also joined top affiliates Jonathan Volk and Shoemoney that day. Well, yesterday I met up with my close friends WayneDog and Ad Hustler. I also met up with my AM Erin, shes the best and knows her stuff.

I also met a lot of new people and fellow readers. Great to meet readers and like minded marketers. Also talked to a couple new Azoogle guys, new AMs, employees of Epic Advertising, COO, directors etc. It was good to talk and see the other perspective of an affiliate network. The problem is that I really didn't want to talk about offers or learn about new offers that are doing well, I mean I get the emails everyday. But I did enjoy talking and discussing parts of their network outside of the "hey Ian I got a great offer". 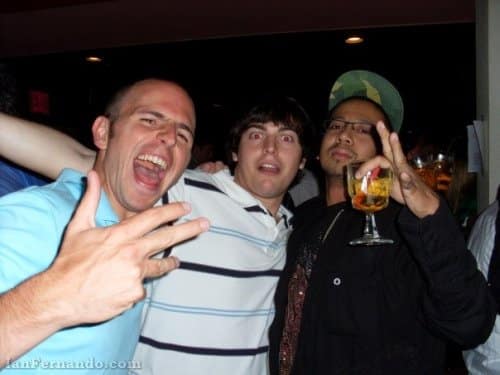 The night was really good and it started slow, me eating food, me drinking a lot, then me wanting to bust people...

Other than that the night was enjoyable. Azoogle also had a band playing at the restaurant called Connolly's in NY. It was in Time Square and it took a while to get there, I mean I walked from the path train. The band was ehh, not really all into that kind of music. The night was entertaining and definitely did a lot of networking.

It was interesting to see a lot of women also, since it is a rare thing to see women in the affiliate industry. Not too sure if they let others in to the pub from outside or if they were really strictly affiliates. The ones I was talking to either were part of Epic or already an affiliate manager with Azoogle.

After a bit of staying and hanging with Azoogle we all went out with Wayne and his team to another bar and then the night was done for me from there, that I remembered anyways.

Well, enough of me typing here are some pictures from last night.