So this weekend was pretty interesting and fast paced I guess you can say. The reason is because there was a spike in a trend in traffic that was worth taking advantage of. This weekend the Jonas Brothers Youtube account got suspended. So I wanted to see if I was able to get a good CTR and see if I can make money off this trend.

So what I did was take advantage of this trend by simply creating a simple LP and putting an email offer behind it. The LP I decided to go with was a basic Poll Landing Page. It was a basic controversy question I posed and also decided to post a pic of the Jonas Brothers as well as create content for the LP. In essence this poll did fairly well.

Now how did I know that the Jonas Brothers Youtube account would get suspended and how was I able to react rapidly to it? Well there are a bunch of things that are opened on my monitors that I watch every so often, I am basically watching trends on the internet. 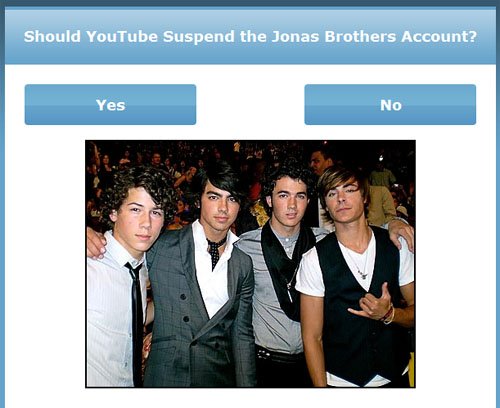 Now, I was able to take advantage of this surge of traffic by watching trends on my PC and seeing what is happening. You can say I almost can tell the future. But Saturday morning I was on Youtube to just see anything new and saw that the Jonas Brothers did a ‘Single Ladies Dance’, interesting. Literally mid day there was a rise in conversation about this video.

The thing about this is that people that are in a frenzy about this issue are willing to take a type of action because they want to see these guys account get re activated and ofcourse die hard fans. So take advantage of their emotions and bank off it.

The thing is this type of traffic is rapid, meaning the surge of traffic only happens at one point and then periodically dies. It doesn’t die in days but in minutes or even hours, so taking advantage of this is important as long as you can spot the trend of a niche, in this case Jonas Brothers.

Since I have a poll and these users are fast reacting, you need a simple offer that will be related and will convert. I usually use email submits on these and rotate. It makes it a fast response and easily gets the user in and out.

…hmm I think I started writing this backwards, wanted to talk about finding trends

Well how did I know Jonas Brothers was going to be a good traffic source to risk my time. Well celebrities are always being followed and always getting into some sort of trouble and if they do, there is a controversy online. From seeing the Single Ladies Jonas Brother Video version on the front page of Youtube, I figured it would be watch a bunch of times. But I don’t do any ‘Make Money Online from Youtube’ schemes. So I just let it be.

Then I saw a specific keyword that is so general you would skip it but it related to the Jonas Brothers. It was on the retweet radar, which you should be following for conversation trends. Then again appeared on TwitScoop. I was like damn this might be worth attacking.

Once it started to become viral, I saw another keyword which lite the sky and I knew I needed to some how take advantage of this. The lesson here is basically watch trends that are happening in real time, they are very valuable and for a short time only.