Yesterday I was out all day and it was a fun and entertaining day. Also it was my first time at baseball game. Let me tell you it was interesting. So early morning I got ready to head out to NY, where their office is located. It was fairly easy to find, the traffic in the morning was a monster.

Finally got in the city. Since I didn’t have any breakfast, I decided to stop in McDonald and have some bacon, egg and cheese on a biscuit. I relaxed for a bit because I was pretty early I think. After a bit I walked to their office and found it pretty easy. A couple blocks down from the bull in NY and I was there.

I got up to the 23rd floor of their building and took a snap shot of their Media Whiz logo. I finally met up with Ian Lerner, my AM from Media Whiz. 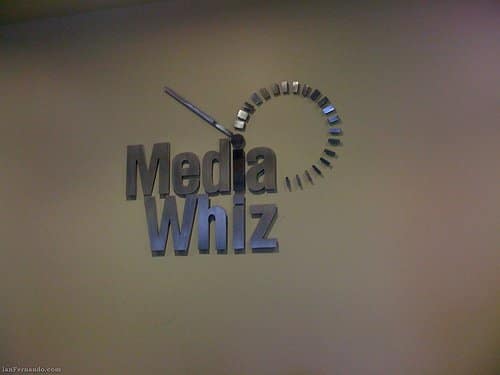 He took me around their office and it was pretty mall but they also had 2 sides and another floor upstairs. I guess once you piece all the sections together you do have bigger room. But it was a bit small. Their patio or balcony was a definitely party spot. It was a nice view and it was definitely big that you can easily fit a good amount of people on their balcony. They should host a meetup BBQ one time during the summer on their balcony, they can easily get a bunch of affiliates that way! (tip for Ian) I mean BBQ some drinks and good music. Easy.

After a quick introduction to everyone and a tour of their office. We went to the game and it was my first time at a baseball game. It was pretty interesting. Plus it was a nice day to be out of the house. I thought it was going to rain but it turned out to be a nice day. Ian and I met up with Benny and one of Ian’s other friend. (feels weird typing my own name on my blog)

At the game we grab some food, relaxed and chilled and just watch the game. It was interesting to see all the fans and we had great seats. Thanks Ian! During the game there was a lot of anger I guess the Mets were down and it was the last innings. The new stadium is beautiful and it looks like it was laid out nicely. The problem I had was the damn planes flying over from Laguardia airport. Other than that I had a really good time.

Video of the office and from the baseball game. It was so nice that I didn’t do a lot of video to pictures. I was definitely slacking. Again want to thanks Ian for taking me out and thanks everyone at Media Whiz I talked to! Also more photos located here.

[youtube]http://www.youtube.com/watch?v=L69P89z5rhg[/youtube]
Sorry, I turned comments off - Read Why - Send Me a Message Instead