Being on a Panel and Other Sessions at Affiliate Summit East: Boston

Monday started to come a long and I felt fine, I didn't have a hang over at all, might be all the rum and coke I was drinking and no beer. Well I was ready for the day and I was excited because I was going to be on a panel. It was my first time and I want to thank Shawn Collins for the opportunity for contacting me and look forward to more in the future.

Our panel was about The Anatomy of a Great Affiliate Program, you can view the slide here. It was interesting because I was actually kind of nervous in the beginning and once I just started talking and answering the panel questions I progressively got comfortable, but it was a great experience. I basically spoke from the affiliate point of view, most of the questions were geared towards the merchant and advertisers side, I just spoke from an affiliate side since that is what I know. 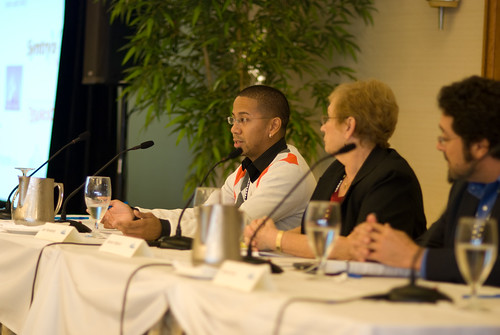 Being on the panel was very interesting, Some answers from the panel I disagreed with and one was providing lack of information. I am not knocking on anyone on the panel but some information was not properly expanded or just worded wrong. Also I was at the end of the panel. I would basically repeat what everyone just said but from the affiliate side.

Well there were a lot of other sessions that I have attended, one of the first one was John Hasson's Which PPC Engines Work, view his slide here. Great session. He introduced the audience to PPV which was a bit risky I think but it is good to let everyone know the sources of traffic that are out there. I actually learned something and I did not know of the other smaller tier 2 PPC networks out there. I have played around with some smaller tier 2 networks and received good results, but I rather stick to the top 3. The only bad part in his session is when he mentioned Top Affiliate Challenge and I was "O NO he is gon to mention my name", luckily he didnt.

One sessions I wanted to get to was "State of the Ad Networks." This was interesting to me because of so many networks that are springing up. I wanted to see what separates one from another one and what one has to say about the quick growth. I remember back in the day I was using only CJ.com and now I am part of several other networks. Crazy! Everyone had something to say but the most active was Market Leverage CEO, Michael Jenkins. He really went in to deep details about the questions that were being asked by the moderators. Bob King CEO of clickbank really did not participate at all on the panel, the moderator had to say "what do you think clickbank?"

"Landing Page Testing to Attract Super Affiliates," was another great sessions I went to. I only attended about 15-23 minutes of it because I had a group gathering with some marketers. The intro was very strong, listing the main concepts of what a landing page has and what to test. Interesting stuff. It was too bad I didn't get to stay for the whole thing.

Another sessions I went to was Amit Mehta's "PPC Super Affiliate Strategies you Must Know", you can view the slide here. It was interesting but it was also repetitive, I have seen bits and pieces of this slide on his other sessions. So it wasn't really that informative but the Q&A was, since it was interesting to know that Amit only has 1 Adwords account. The session would be very beneficial to a lot of start up PPCers and ones that just got started in affiliate marketing. To me it was basic as I have seen it and heard him speak about the same topics prior.

I have not went to any other sessions really, I was busy networking a lot. I went to lunch with some new friends and even talked to a couple of new people about how to get into affiliate marketing and how to make money off affiliate marketing. Most of my time at Affiliate Summit was networking and meeting up with affiliate managers and getting to know more people. I even had a nice schedule of what I wanted to go to but I just didn't find the time. I was either being stopped by other affiliates or networks or I was just to tired to go to another session. There were a lot of good sessions too that I thought were very interesting.