EntrepreneurFix Q&A: All About Starting Out, Inspirations, & Re-Investing 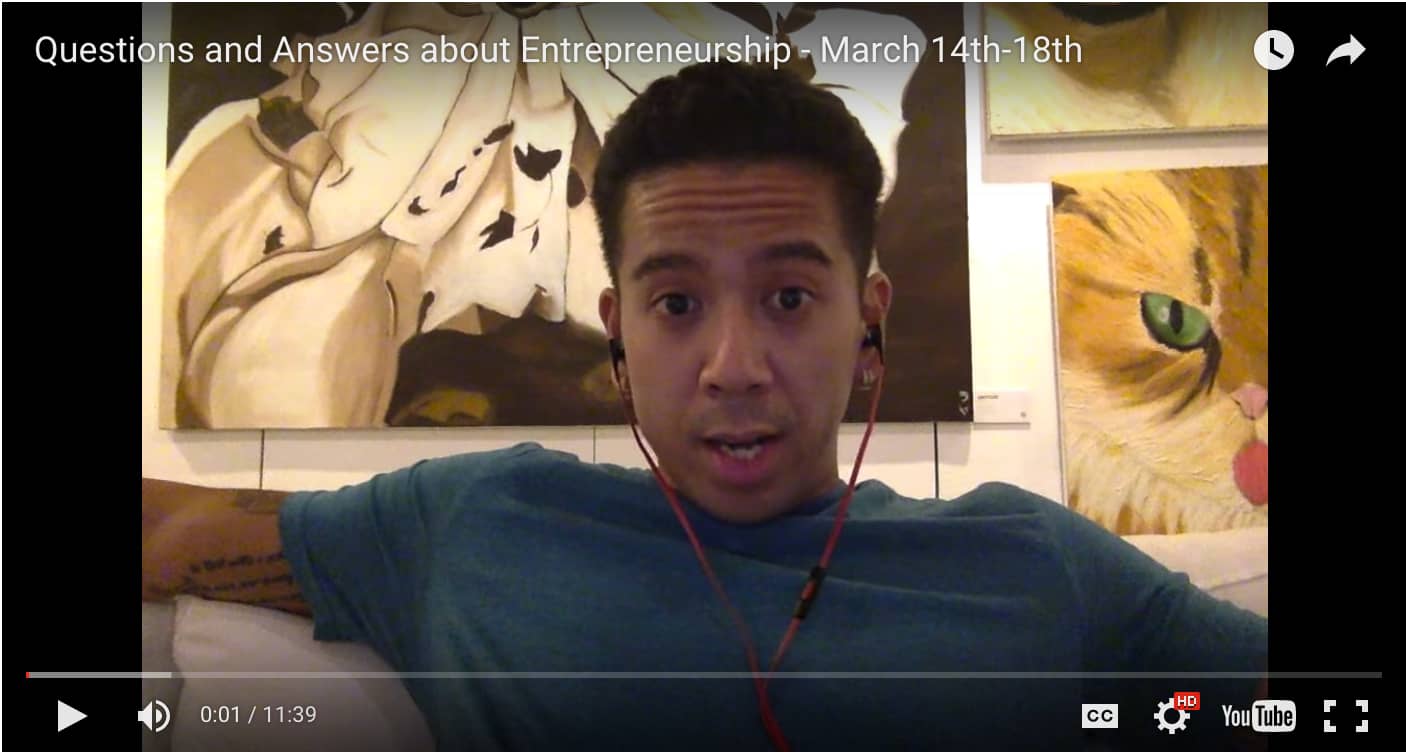 The other day I posted that I am going to be participating in a Questions and Answers for my buddy Oliver Kenyon via EntrepreneurFix. I answered some of his forums member's questions and decided to also post a video of it, transcribe! Enjoy!

Whats going on guys, Ian Fernando here from IanFernando.com and I am ready to answer your question on Entrepreneur Fix. I would like to thank Oliver Kenyon. So let's all get started. Let's get into the questions. I'm gonna answer them the best way I can and let me get to them right away

Most of like starting or how to create website, understanding how code works, the marketing aspects, testing and then later on I learned how to do lead generation, I learned I how to do my own products, create digital products, do customer service, networking, lead brokering, there's a lot of stuff that you kind of learned from the bottom ... up.

A while back, I think last year actually I made a video speaking about how it is best to be an affiliate marketer, instead of somebody that would probably start as a lead generator or an advertiser, or merchant processor, etc. because you actually look at everything from the ground ... up, instead from top to bottom.

Well... for me, there are a lot of events that I have attended in the past. Basically attended a lot in the past...The best ones to attend are definitely Affiliate Summit, adtech for technology, leads con for leads, information brokering, etc. then more recently which is concentrating in the affiliate industry is Affiliate World Asia. Those are the networks, events or conferences that you should go to.

There are definitely some small ones like electronic shows, advertiser shows, small meet ups, they are all good to go, but you also have to find your value. I'll probably spend ten thousand dollars probably to go to a think tank a while back just because there's a meet up or a conference or just like minded heavily people that are willing to pay us a lot of money just to hang around us people with a lot of money so it all depends.

But if you're starting out definitely start out in Affiliate Summit, Adtech, Leads Con then more recently the Affiliate World Asia.

It's all about originality, definitely more networking.. if you're just gonna haggle with an affiliate, but when I was an affiliate back in the day, every network would ask me up asking for traffic but what's the difference from one network with another, higher payout? I mean I remember the time in a network when I first started that I don't want high pay out you know and what kind of affiliate marketer would say that right away, right.

So for me, denying a network telling them and saying ... Hey, I don't want this payout because I don't how I can give you volume... so what else can an affiliate network vie, back in the day there's a lot of affiliate appreciation, contest, relationship, helping them out.

I know because when I first started the network that help me the most the one that got most of my attention, most of my traffic that one that provided more value and then later on provided with a lot of revenue, so it's definitely the relationship, definitely more of the value the exchange of ideas, and what you can do to make each one better.

Not more like I can pay you this, I can pay you that, please run my traffic, there shouldn't be a begging attribute to the in between relationship it should always be like ... hey how you doing, what are you running right now, did you know I have traffic probably on native ads that everybody's trying. You know you want to be more engaging instead of demanding.

I think one of the keys is that you should be able to take risk do risk and be willing to fail and learn. There's a lot of people that claimed to be entrepreneurs but are not, you know. I'm actually an entrepreneur by accident and the reason why is because I force myself to work hard, to get rid of three of my jobs. When I did that - eventually when I get rid of one job after the other, and when I'm left with one.

I talk to myself I said hey if I was able to get rid of these two jobs, maybe I can get rid of this last job, which is the high paying job, eventually I did. I basically strategize myself and was willing to get out of the safety net and you know what let me do this.

I had about four months of revenue in the bank from my job .. my savings, and if I can't do it in three months, just then I'll have three days in the last month to find a job, but eventually luckily for me it didn't happen. I definitely took a lot of work to get to that point. Because instead of working probably five hours or six hours after my eight hour job, I was able to work at least doing twenty hours doing probably prior, so it's all about the hassles, it's all about the grind, it's all about how you really really want it. So if you have that drive, that spirit, and I know you'll make it.

Well this question is different. From two perspectives because if you're going to talk about as a beginner, then I'll put a hundred percent back from the first time I started. Nowadays, I tried to put it in on what's needed to grow it as I need to. So first example when I first started if I invested hundred dollars and make two hundred dollars, which is a hundred percent ROI, I'll put all back that in.

But now let's say I'll make a hundred dollars now and my overhead is only seventy dollars, I'll probably put eighty dollars back in the company and then keep everything back in the bank or in portfolio investments so it really really depends on the scenario that you're in. If you want to keep your business slim or you want to grow rapidly and go hard. It really really depends. If you're a beginner, then you put all hundred percent. You want to keep on increasing sand scaling.

The more you can put in more money in the campaign, it fastens your scale, but if you have business, office, employees, all those others stuff, then it all depends on what you currently have. How much you currently have, how much you're paying for traffic, the resources your using, etc. and then come back and send some into your bank or toward your other investments.

Truth be told, honestly I was reached out during my second year as an affiliate. I first speak out in Affiliate Summit East in Boston. After that it just became a rolling effect for me. People just continuing asking me, continuing asking me, but I also want to say that my blog helped me get speaking engagements because I put myself out there.

I'll be busy telling on how it work for affiliate marketing and sooner or later somebody actually notice my knowledge or my experience and they ask me to speak and then after that it just became a rolling effect and then I use each speaking engagements in the past to basically mobilize myself into any other speaking engagements.

They can see you speaking, giving value, then people will reach out. That's what happened to me so that's how I can speak about it.

So inspirations obviously are the billionaires, I think people like Mark Cuban, Warren Buffet, Ian Mulster definitely my inspiration. Out there with mind that can change the world and out there one with great business minds.

I watch how they think a lot so that's my inspirations well.. when I first started I didn't know all about these big guys because I really didn't read about these financial news or how to better myself etc. etc. I basically just enjoy reading about John Chow, Shoe Money, Problogger, Zac Johnson, Jonathan Volk you know they inspire me because they already made it from what I've seen and read, from when I first reading about them, from where they are at now and started reading contents about them and they are doing really really well even before where actually started reading about them.

My inspirations are just the big big guys because they are doing business in a whole different way. They are teaching in a whole different way. The industry is changing so much. The business change so much that they have to adapt to it.. while simple rules like with Warren Buffet like he keeps very very simple when it turns to business like systems, process, organization, not spending money, it all varies up on who inspires me but it definitely all the bigger guys now.