Explosion of Heat on my Own eMail Submit Offer

Happy 4th of July, strange it is on a Wednesday. Sorry for the lack of posts, I have been busy creating my own offers lately. The content on the blog has been a bit slow. Today on fourth of July, I figured I would show you a heatmap for one of my offers and what my thoughts are on the activity of the heatmap.

Here is one of the first offers I have made, a simple email/zip submit offer. This specific lander had a width of 1026. The type of traffic I was running was PPV traffic. The width of the popup window was 800, but I wanted to see how users would react to a half lander being shown, here is the activity of the users that interacted with the lander with a 1026 width in a 800 width popup.

My analysis: The obvious, the window is too small for users to see the full form or read the full title. As you can see users clicked on the letter H in the word month and clicked in the middle of the form. When I compared the window using AffPortal's window popup preview, the clicks were happening near the end of the width of the 800 window. That is where the submit form was only half way visible.

This obviously told me that my lander needs to be adjusted to the actual width of the popup window.

Why I didn't just do it in the first place? I was probably in a rush to get it out and send some traffic, so I probably didn't think much of it - plus ppv traffic is cheap. So there wasn't much interaction with this first page lander. Now let us take a look at a modified lander...

My analysis: This did much much better. This lander fit perfectly in the popup window and it received more interaction than the prior lander that didn't fit in the ppv window. You can also see the shift of users on where they clicked on the form. Instead of mid way in the form, they clicked near the beginning or next to the actual text.

This specifically shows that a perfect lander needs to fit snugged in a ppv window in order to get some sort of traction and interaction.

Since this is my own offer, this isn't complete unless the end user fills out the second form and goes through a path (where I actually earn money). Even though I am collecting the data, I want the end user to go through the path. 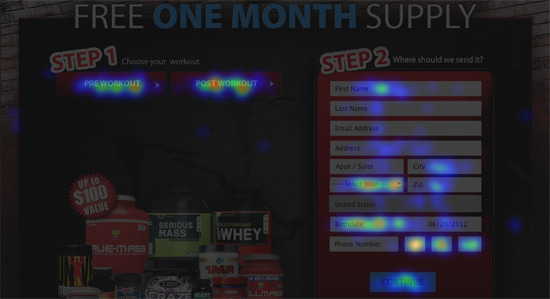 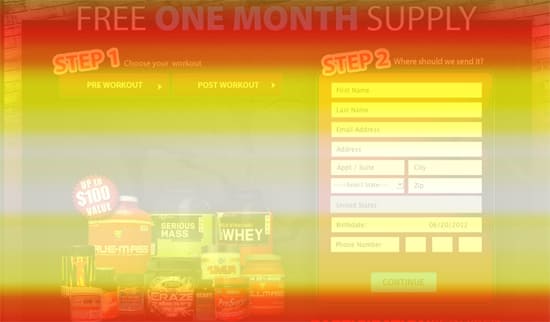 My analysis: The top heat map, the click heat map shows users were in engaged with the lander. I created a 2 step process because I wanted user participation by giving them choice. I made it very prominent what is step 1 and what is step 2, this made it very simple to the end user. With the interaction users started to fill out the form and feel the need to participate.

Engagement I think is key when it comes to creating an offer. You will see activity on the first field where it asks for their name.

hen the forms below the name field had very little clicks, this will tell me the user is most likely tabbing to get to the next field instead of clicking each individual field. Also since the email address and zip code are automatically passed through, they have very minor clicks.

The state dropdown has the most interaction because they have to physically click on the drop down menu to chose their state. It has the same amount of heat as step 1, so this tells me most of the users continued to fill out the full form.

The second image, showed the scroll heat map, which tells me where the end user spent most of their time. This looks accurate because I want the end user only looking at the form and nothing else.

This showed that there is only 1 direction to go and that is to fill out the form and hit the continue button. Most of the concentration is on the form itself and I made the form a priority to the end user. There was a bit of scrolling but no concentration was made elsewhere beside the actual registration form.

Some drawbacks: I am now testing a new lander with a minor adjustment. If you look the continue button did not match the heat intensity of Step 1 and some of the form submission fields.

This tells me the end user either gave up or a field form alert popped up and then they decided to give up after that. I have made a minor tweak and I am now waiting for the results of my adjustment.

Some benefits: Since I am collecting the data, the end users are reminded they can still participate. I have also a set of emails with content and affiliate links in them as well. This way I can earn money from the end user on the backend and later on.

Let me know your analysis of the heat map, what story does it tell you about the traffic? Have a great 4th of July!