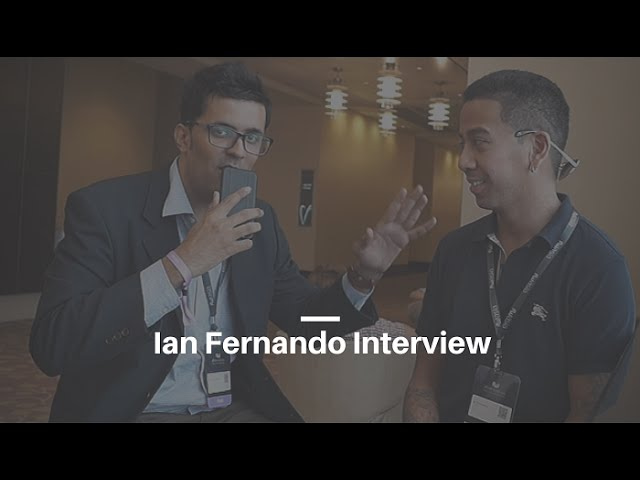 Ian:                 Well there is a lot of stuff that I can talk about, I mean from when I first started maybe 10 years ago to now having my own business, several products, several companies, doing investment… so you tell me where you want to start and we'll go from there.

Jitendra:        Yeah, so how did you get started in affiliate? Who taught you about this affiliate marketing? Who are your mentors?

Ian:                 So back in the day I got into affiliate marketing because I was kind of forced into it; I was working three jobs and I didn't want to... my goal was technically to get rid of two jobs and basically have one and that was my goal, so I basically researched I became an eBay vendor. By that time I was still working three jobs so I was not able to get rid of the side effects of having customers and refunds so it was still hard work. So I discovered affiliate marketing, back in the day I was working with Azoogle Ads and NeverBlue and they basically help me or specifically Azoogle Ads help me to get to 1000 dollars a day, then 2000 dollars, then 5 figures on the weekend and everything, so it basically helps me a lot in that aspect.

Ian:                 So right now since I do have my own products, my own offerings, my own hosting platform, I have my own… I'm an advertiser now I've been advertising for the past three years, I have my own nutra, diet, skin, male, brain offers now and I’ve basically learned traffic on my own internal stuff.

Jitendra:        So how do you drive traffic to your site, to your landing page?

Jitendra:        Okay, so do you use any kind of Facebook ads for your business?

Ian:                 Not really I probably only use the aspect of the social branding for it, but other than that I just buy media through Google DSP or Google adwords in that way.

Jitendra:        So which is your favorite affiliate program, I mean, it Clickbank,Shareasale, CJ, jvzoo...? What kind of product?

Ian:                 So again since I've been an advertiser for three years I haven’t ran a lot of affiliate network stuff, but I've worked with Clickbooth in the past they are very good, they've taken very good care of me in the past. As of right now I'm not sure since I do run mostly directly with advertisers in the past and I do have my own products now, so right now I can only recommend click booth since they've helped me in the past prior.

Jitendra:        Okay and you take care of your health so you do gym thing and all these stuff just to keep fit?

Ian:                 Yes, so I always have a routine, so I don't really look at my laptop until probably in the afternoon until I really really have to, if it's an emergency then I’ll wake up. I do have a routine I wake up, I have my breakfast, I go to the gym, I run, I meditate and then I open up my laptop. So I try to always be mentally fit, physically fit and also healthy at the same time.

Ian:                 Yeah, So I've known John Chow now for a while, Shoemoney as well, Zac Johnson, I follow Lorenzo, Charles Ngo also, so these are all very very good guys and I've known these guys when I first started, you mentioned mentorship prior, I probably was following Jeremy and John Chow and Zac Johnson when I was just starting out as well and I basically mimicked my model and followed their footsteps and do what they're doing now as well.

Jitendra:        So did you join any kind of affiliate training when you just started in your journey?

Ian:                 Yeah, so most of my staff was self-learning and networking and asking questions. I remember going to my first networking Summit West conference and I met so many people that I was so information overload that I wanted to do every tactic. By then I focused on just one, see if it work and then do another one and then move onto the next one. So I basically tried test and trial and became successful through that, but I also had the help of my affiliate network, my affiliate network is what got me to kind of where I'm at today as well.

Jitendra:        So how did you build your network in this affiliate, so you went to events and you try to build good relationships on Facebook and social media how did you do this?

Ian:                 So growing my brand was pretty easy I basically started the blog, my IanFernando.com blog just to basically have a journal of my experience so this way I can see where I came from, but eventually some of my tricks and tactics and my failed campaigns actually caught wind and people were looking and reading and they were just more interested in what I was doing instead of making money. Even though some of the posts were just like, “oh I lost 22,000 dollars in one week” or “I was losing 100 dollars a day,” you know a lot of people like that because they like to see failed experiences and so they can later alternate their strategies or compared it to theirs and have a very adjusted strategy later on. So for me it was more like network in informational posts that people liked that they wanted and they just stick around so...

Jitendra:        So how do you approach big people in affiliate marketing? Suppose if I want to reach an affiliate guy who’s making eight figures so how should I reach him? How should I convey my message to him that I want to learn from you or I want to meet you or just like that how should I build a relationship with him?

Ian:                 So basically I get that a lot also people get to me, “hey can I be your mentor let me work for you for free,” but then for me you also have to think about that person you have to think about okay how much time does he have available to give and provide and sometime it's not a lot of time. So you either have to be consistent and just network with him slowly like day by day or at least provide help him with some sort of value; since you don't have a revenue or you don't have marketing tactics you can at least provide sort of time, information or you know, just give yourself up for a little bit where he appreciates it. I've had people back in the day like, “hey I need do you know somebody who can do this for me real quick?” and they’ll do the research themselves and just lie “okay cool they asked me questions and I just give quick feedbacks.” I've had people that just asked me questions for most of my years in this industry and they haven't paid me, for me it's just more of like I can help you get the information

Jitendra:        One last question how is experience at Affiliate world Asia right now?

Ian:                 I actually enjoyed this conference Lorenzo and his team and Jordan are doing a great job at it. I've been a part of the forum for a long time, I've been to almost good majority of their meet ups from Amsterdam to Thailand 2 years ago to London, so I have seen this from a regular meet up to a conference which is amazing so they are doing a very very job at it, it’s what… when I first started this industry it's what the industry should be still be of all affiliates and not just marketing like other summits are.

Jitendra:        It's a pleasure to interview you Ian so thank you for your time and I hope you enjoy this interview.

Thank you again Jitendra, I enjoyed the talk. If you want to check out his version of the interview, you can check it out at BloggersIdeas.