IZEAFest 1st and 2nd Day PLUS almost Fight at Night

I am currently in Orlando, Florida attending IZEAFest. I actually arrived in Orlando on the 10th to hang out with my cousins and tour Orlando for a bit. The strange thing about Orlando is I literally landed with gorgeous skies and got picked up in a hurricane of rain, which only lasted about 30 minutes. I actually had a whole day and I decided to hit up Market Leverage to see if I can visit their new office. I hit up Erick from PPM (Precision Play Media, parent company of Market Leverage) and asked if can visit and if they had food. They did have food and I decided to go and pay for a 50$ cab ride to their office, wow a 50$ cab ride!

I took a tour of their office and it was big and spacious. I also met up with ShoeMoney as well and talked to the president and CEO of the company. It was very informative and entertaining. I also talked to their API guy about my new project service I am currently doing, he provided a lot of good information and even advice! Thanks!

After visiting Market Leverage I went to dinner with my cousins. I have not seen her in so long and we went out to eat at Cheesecake factory. I was super hungry because my flight was tiring and I had some good food at Market Leverage but it wasn't really enough I guess by the time dinner hit. Man I tore that Chicken Marsala Up!

The actual first day of IZEAFest was just a gathering of all the social marketers and bloggers to just have cocktail and drinks. I met up with a lot of people such as Neil Patel, Unique Blog Design Team, John Chow, Jeremiah Cooper, Fat Man Unleashed, Zac Johnson, and many others. I had a couple drinks and left the gathering pretty early to hang out with my cousins.

My cousin and I went downtown to a couple bars to drink and it was a blast. My cousin knows a lot of big people in Orlando and does he. It was entertaining to talk to big promoters of Obama and even rockstar bands that travel. Everyone was buying everyone drinks it was crazy. By the end of the night we were walking to another bar and that is when the night went ugly. My cousin was lighting his cigarette and a bum needed a light for his, my cousin was going to light his cig for him until he snatched it from him, I lost it. I started to bug out on the dude and was like don't disrespect my cousin. Bum walked away. Literally 3 minutes later some dude, as we were walking, started to talk smack about the bum and how we was rude, my cousin to shut his lip. The dude thought he was tough and threw his pizza to the floor and wanted to start something. I was saying lets get it in, but he was attacking my cousin. We family so I said lets get it in. Me being the loud but also thinking 'hey I have a convention tomorrow' pulled my cousin and just walked away. Dude is still talking.

I was mad - but walked back to the hotel.

The 2nd Day of IZEAFest

The keynote by Jeremy was entertaining and funny, he talked about his growth and his accomplishments. Very entertaining and shows that making money online can be done. I was twittering the whole thing and as well as taking pictures. The other session were also entertaining with the exception of the Content is King, which really was blah and very zzzzzzzz. I found the big money bloggers were also very helpful with information but things I already know. 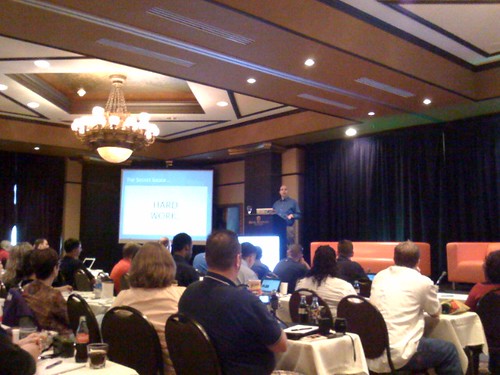 The only thing that confused me was the event is being streamed via Ustream.tv, but I paid $50 to be here, why is it being streamed? I have nothing against it but it defeats the purpose of paying $50. Not sure what that was all about but there were a lot of unique things that were being said in the chat. I even met more Jersey Bloggers and successors, which was entertaining as well. It seems there is going to be a meetup soon in Jersey for Jersey Twitters! Awesome!

More Updates soon to come, but follow me on Twitter and you can keep up with me live!