Writing this from the airport... while waiting for my flight back to Jersey

This past week I was in Miami, Florida enjoying some sun while New Jersey does its usual seasonal shift. I flew down with Rohail Rizvi, since he is looking to move to Miami for a couple months. So while I was at the Performance Marketing Expo, he went apartment shopping.

The content at PME was very very good, they got some great speakers like Michael Tchong and Stephen Spencer. I also spoke on a panel which was very entertaining and very most sought after panel to be at.

The conference was 2 days and it consisted of keynote presenters in the beginning and then divided into 2 tracks, merchants and affiliates. There were also several affiliate networks that were at the conference and advertisers, more agencies and merchants were here as well. Even though it was not a big 'expo' the conference itself had good content for their attendees.

Another aspect of PME is they feed their attendees, because it is a small conference they catered to their users providing them a lucheon and on the first day open bar block party with food. It was a graet way to upstart their relationship with the attendees.

So let's talk about the days I was there.

I was at the conference the full day 9-6 listening to the speakers and networking with many users. I also found some users that were at dk's ThinkTank that were speakers and attendees as well. So it was like almost having a mini ThinkTank. Michael Tchong gave a great introduction presentation about trends and how we act on the new trends. How we are more dependent on technology and the internet. While Coupon Mom gave a great insightful personally story of how she started from nothing to getting on Oprah and multiple TV shows.

Before I continue, they treated all the speakers to a private dinner the day prior. The food was amazing but in tiny portions, I breathe'd in my filet minion. I want to thank Performance Marketing Expo for having the dinner for us. 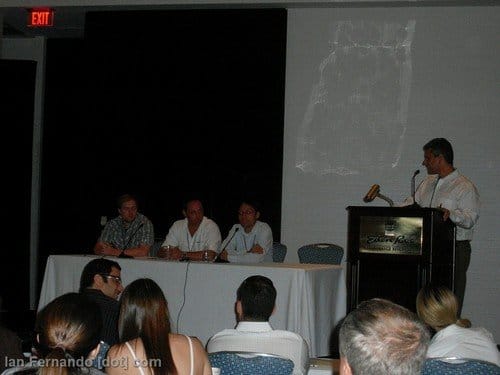 During and even in between I talked to the people behind Performance Marketing Expo and wanted to know their future goals about the show. They want to grow the conference but not have it be HUGE like an Affiliate Summit, they want it to be more niche oriented towards people already doing and wanting to do online business in the performance space.

I thought that was a great concept to have a small conference geared towards users who are already doing performance base marketing but want to expand more. The great part is they are base in New York, I think I may visit them when I am back in the city. There was a good mix of attendees that attended. It wasn't pure Performance Marketers. I met users that had their own products and services, networks, smaller advertisers, local merchants, and many others. It was a good mix.

The most interesting conversation I had was with a user that claims to do affiliate marketing but didn't understand any of the acronyms I was talking about. It was weird I had to explain what a 'vertical' was or how EPC worked, but this person has done affiliate marketing for 10 years.....

The second day I was a bit tired from partying hard with my affiliate manger from Clickbooth. I made sure he was taken care of at the club. I woke up just in time for my session with John Chow, Eric Schechter, Murray Newlands, and myself. Our session, I think was one of the most anticipated session to be at and I want to thank Evan for a great introduction.

Personally I wanted to make sure our panel wasn't boring. I do not want it to be just speaking in the mic and answering questions. I am all about engagement and interacting with the audience, making sure they respond. I personally sometimes get bored of the atmosphere of a conference because you expect to sit and listen and not respond, and I wanted to change that. I made sure our panel was very entertaining with remarks and attitude.

Here is the video of the panel and you can see the full slide at John Chow's blog.

After Performance Marketing Expo, I had an extra day and decided to just show up for the Social Media and Advertising event for just an hour, then it was off to the beach to relax and work, then party hard the last night in Miami.

Overall the event was good for being it's first. There are def some improvements which I brought up but the audience enjoyed the content and content is the most important part. As long as users take away something from the event then it is beneficial to them.