Continuing with my Product Launch Formula, I want to talk about creating urgency but being valuable. There are a lot of ways to create urgency during pre launch, on launch day, and even post launch. I will discuss all three within this post.

Currently of you got to Twitter Snipe, you will see a coupon being used but it is only active for their first visit. (so if you have bee to TS prior you may or may not see the coupon) This is being used as a way to encourage the user to feel a sense of urgency. It states it as a warning and boldly states that the coupon is only active on their first visit and will not be seen again.

I am creating an importance by stating this coupon will be gone after they leave. If they do leave and come back, it will be gone as the coupon is cookied. 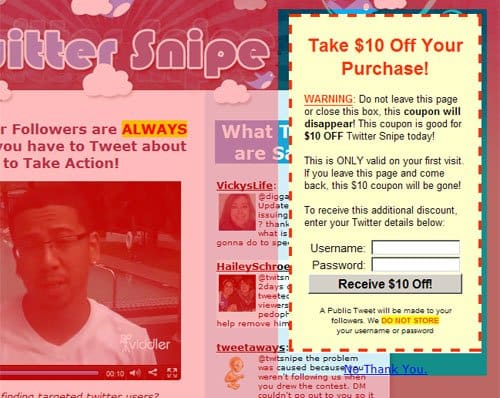 Making users feel that it is important to take action now than later will help you gaining more sales and even leads. Urgency can be tied in with Scarcity, but that is another topic. Urgency gives you the chance to gain more affiliates, more sales, and 'right away' buy now actions.

Using Urgency Prior to Launch:

While you are in the pre launch phase you want to create a hysteria, this way you can get immediate buyers on launch day, better yet get more traffic on launch day. Using it prior to launch is simple, create a need to why your product is far better than others out there. That's it. Create the need. Its urgent to solve a problem and if it can solve it its basically urgent!

Maybe even creating a contest causes a sense of urgency, only 3 copies will be given away if you participate. Scarcity + Urgency. Only 3 FREE copies will be GIVEN out TODAY. It is urgent to participate because you want the product, but also there are only3 copies being given out.

Urgency on launch is really powerful, because so many users do not even read your sales page. Most just go straight to the BUY NOW button. If you can have just a single website with a BUY NOW button and nothing else, as long as you created the hype and urgency. Users will buy on launch day without thinking if there was text or not.

On launch day of Twitter Snipe, I set up an urgency for buyers to get the platform at a super discounted rate! So low that me and Sam were really rethinking if it was  good idea. Well it was a good idea because we got a ton of traffic from it as well as buyers. I created a sense of urgency where buyers can get it at a super low cost only if they were the first set of buyers!

By telling users that they are the first 10 buyers to get it at this low rate, then they will almost take action on launch day without thinking. They know this because they were either part of the hype or hysteria.

This is the easiest as there is no maintenance. Unless you want to continue the urgency or if you are closing your doors after X amount of sales or copies, but again still the easiest. Creating this urgency after launch is just asking users feel the need to at least save a couple bucks on their purchase. Everyone loves to save money, why not give it to them. You easily generate a sale and captured a lead. Post launch urgency can either be:

Either of these is important and creates that scarcity of urgency. You want users to take action now and not later, urgency + scarcity helps you do that.