Push Advertising 101: Blacklisting, Don't Send Unwanted Push to IPs or Sources that are not Profitable 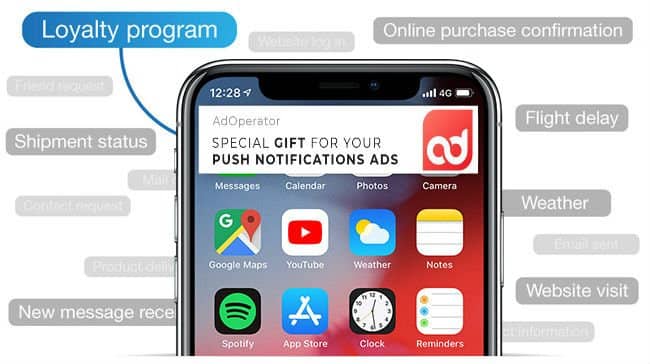 Push traffic is still a craze in 2019 and there is still a lot of inventory to buy on push. Recently I have been testing AdOperator's Push traffic and I have finally gotten it to a point where it is converting. Profitable not yet.

It was a long struggle to get to this point because I was being very cautious with the spend as I do with any traffic sources. I need to understand how traffic works. With AdOperator I have a huge list of IPs and subIDs that I have blacklisted.

The one issue I had with AdOperator is that each campaign is only allowed 1 image, whereas some other push networks allow 5-10 creatives per campaign. So this caused some testing issues because even though I might say 1 click per IP it doesn't mean the other campaigns will follow.

So if I create 5 campaigns there is a potential for an IP to see the same campaign 5 times but each creative once because I set 1 click per IP in each campaign.

In any case, here are some stats for you to look over. These are not the best stats when it comes to my other push case studies, but it just started making some conversions. You can see the numbers are pretty low for a sweepstake offer LP CTR.

The numbers above are from my Binom tracker and they are ehhh... So let's put it against the numbers from AdOperator and see what the costs are for the same dates. Below, you will see 3 campaigns, this specific one we are going to look at is the first row.

I started with 5 campaigns with 5 different creative images BUT the same icon, same text. I wanted to see the differences in ad CTR and I kept the performing ads.

The campaign spent a total of $45.81 and only made $7.20 - we are down 84% ish. I also increased the spend from .03 to .09 hoping to get better quality clicks which seemed to help at least is what I am thinking. I also did have an ever-growing Blacklist of IPs and subIDs that I load into AdOperator.

Blacklisting on native and push traffic is crucial. Why?

With push traffic, the quality of the subscriber dies when they receive way too many alerts. The cheaper clicks you spend can be a bottom tier user and are already exhausted. Increasing spend can be a way to help get better quality clicks.

While increasing spend, you should also blacklist all the IPs that it has been sending out notifications to. With AdOperator, they give you the ability to block SubID which is the specific widget/source/website that is sending the notification.

Finding IPs to block via your tracker, here is how I do it via Binom

AdOperator gives you the ability to block SubID which is the specific widget/source/website that is sending the notification. Similar to how native advertising works, you can block the widget ID that is not performing or the actual website hosting the widget.

If you are not tracking your tokens with a tracker, AdOperator gives you access to the subIDs which you can export and then upload it to their system to blacklist. You will need to pass your conversions to their platform though.

I have only blacklisted a few as conversions did come through, but I will blacklist the IP address, which is important. You should be blacklisting every day or at least after X impressions to the IP then blacklist it.

It is very important to blacklist as sources can be bad sources and IPs can be non-responsive. Avoid wasting time and money on non-important clicks, but it does take some time to get the data you need.