Before affiliate summit west 2010, I took a mini vacation to Orlando. It was my little nephew’s bday and I decided to just go visit him. Plus it was too cold in NJ that i needed some sun in my life. Well I traveled to Orlando and found out it was cold there too! But after 2 days it started to warm up.

I hanged out with my cousin and my little cousin while I was there. Definitely love my family. I enjoyed just relaxing and chillin with them. I did take one day out of the week to visit a network, Clickbooth.

I drove up 2 hours to Sarasota, FL to take a look at their office. I met up with Eric Schecter and he started to show me around. I first wanted to say what up to my AM, Brittany but her boyfriend was there and he insisted I take a pic with him… 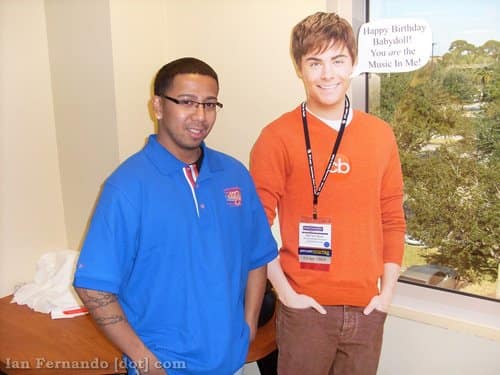 After talking to Brittany I took the Flip and started walking around and video taping their current office. It was interesting to see everyone had gym lockers. It is also interesting to see that I only saw literally 10 people in their office. I met up with the CEO, really cool dude! Actually there is a lot of cool people there.

Well, here is a quick video of their office currently…

I said currently because later during the day I went to see the new office. They are growing so fast that they had to move into a new building/property. Now that building is big!

When I got to Sarasota, I tape their office and then me and Eric had lunch in Siesta Keys in Sarasota. The weather was really nice clear skies and light winds. Eric took me to a place called SKOBs, I had a nice Grouper fish because my little nephew recommended a grouper when I get to Sarasota. It was really good.

The interesting part is the fact the restaurant is covered in singles. I had to do a little video, wait to the end. I want to thank Eric for lunch.

We headed back to the office and we started prepping up for the tour of their NEW office! I thought we were going to go tour for 20 minutes and get out. I started seeing rope, bike, skateboards, frisbees, a camera, and all kind of crazy ish.

I was thinking WTF are we doing? I thought ehh maybe they are just packing ish. Later to find out I was about to be a star in the next Hollywood film produce by Clickbooth. It turned out to be a fun day though. I did an interview with Eric and then we just had fun in a huge open space of the new building.

Here is a snapshot of the new building from the outside, they have 2 of these buildings… 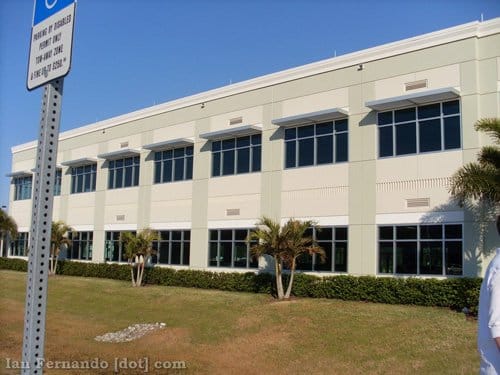 It was like being a kid and breaking in an abandoned house, but it was Clickbooth’s. After a full day of filming we headed back and Eric did an interview with me. We just chatted about the industry and my mistakes etc. At the end of the day we went out to go to dinner.

Brittany was getting jealous I was spending way too much time with Eric. So we three went out to dinner at some fancy restaurant. Felt kinda out of place cause everyone kept staring me down… not too sure why…

Anyways, we had a raw bar and then some fresh seafood. Amazing food. Apparently Eric didn’t know how to work the raw bar. Brittany and I was just laughing… The food was amazing and I out ate Clickbooth!

That night Eric took me out on the town to drink and have fun, apparently Eric got me on camera… dancing and ish. Well that will be on Youtube soon I guess. I met up with some ladies at the bar, four of them and we just danced and chilt. After that the bar we were at didn’t work out so we went to another bar where we met up with 2 more Clickbooth ladies.

From there the night was epic and just balled out.

Thanks to Eric, Brittany, and Clickbooth for having me and letting me have a sneak peak of their new office. I would post the video of the new office, just not sure if they would like me to disclose it. But they have some more pictures on their blog.

BTW expect a crazy video from Clickbooth… man how they tricked me… but it was fun!