Sponsored Tweets: Results as an Advertiser

So it has been a good solid 2 days since I registered and threw up a sponsored ad on Sponsored Tweets. The results were interesting but it wasn't what i hoped it would be. I will see and show you some tricks that I did that hopefully optimized it, but still in the testing process.

So when I signed up the other day, it was fairly easy and simple to use. I logged in via my twitter username and password via a secure connection to twitter. Once redirected I was prompt to start an opportunity. Which means creating a campaign. It was very easy to use and write your tweet. It was straight forward.

Within the backend you get to chose specific targeted keywords and tags, which is really good. I would thought this would be just base on the amount of followers and not targeted, good thing they can categorize and find publishers base on keywords and tags.

Below is a screenshot of my tweets being submitted via the user I chosen base on their twitter follow base (monday shot). 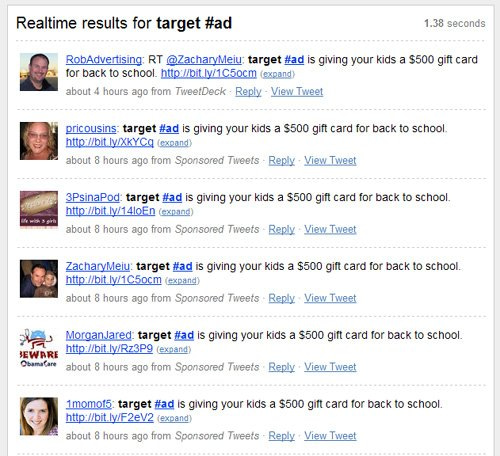 As you can see it became somewhat viral, well not high enough. But someone did retweet it. So it was a free traffic source to someone elses followers. This is great since I get more exposure or reach. So anyways lets take a look at the results.

I also had a smart way of writing my copy, because I didn't want to ad the #ad at the end implementing it was an ad. So I tried to integrate it with the conversation, so it seemed it wasn't going to look like an ad that much. So did that work? Would I got a higher response if I added it to the end instead? or beginning? More testing needs to be done.

My first initial test was HIGH followers vs LOW follower base, what was the CTR and the response. So did I bank?

I spent $84.54 made $3. Offer eMail Submit, Payout at $1.50. There was 2 test done. One test was finding high followers 2k+ and the other test was users with just 100+ but have interactive users. The interface helps you find users that are more clicky friendly.

With this 2 test alone I found paying users $1 to $4 with low followers but active are more responsive than users with higher followers. I spend $9- $15 per tweet with users that had high followers, but they were not that responsive.

I got about the same clicks from users that had followers of 200 than with users that had 2000! Well almost but they were very close to each other. SO users with lower followers cost less to tweet to but are more responsive than those with high followers and cost more. Something to test more in depth about... 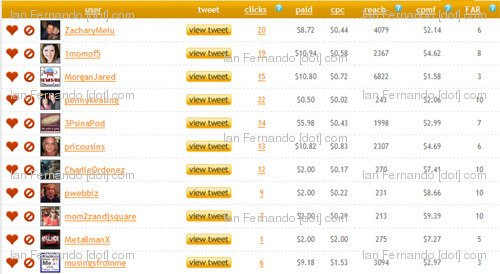 This doesn't look that good right? Well, there are some issues with the network as well, because the clicks did not match up. I also contacted Ted Directly and he gave me straight access to his lead dev guy. To talk about this a bit more.

While Twitter is a great viable resource to get traffic, does sponsored tweets give it full potential to use it for advertisers, more importantly for affiliates? Here are some small things I noticed from my case study.

While there were somethings that I had issues, I found that I can spend less and get a higher CTR. So is this a viable source of traffic, yes. Is it good? Well I only did 2 days of testing. I need to do a couple more to find out if it is viable and useful to me as an affiliate. I still need to talk to my cpa network as to why there were some click discrepancies. That is another issue, sponsored tweets and bit.ly clicks matched (ofcourse, using the bit.ly API) and the network did not at all. Something happening here, CPA network side.

So I have to talk to the network about that.

Is Sponsored Tweet a good source of traffic? I still have to do in-depth testing. Like ad format. Split test the variations of #ad and the other formats they provide. The traffic is there but not worth the high spending on the users with higher followers. Is the traffic substantial? With my test, ehh not really. Is it better for brand recognition? Maybe. Good for affiliates? Not sure...? Currently an email submit should have been super easy. Might be better for ecommerce? Maybe.

Twitter marketing is all about recommendation and believing someone else advice over an editorial review online. So does it make sense to promote something other than email submits? Not sure... I have to test it. But as you can see the traffic isn't substantial, especially with users that have 1000 more and I didn't get that much clicks.

So that is my case study. Hope it was informative. Ted got a great service here, helping grow brand and social marketing. I do not think this maybe a viable source of traffic for affiliate marketers. I know it is still in it's early stages and they are still getting a lot of data from users using it. I will definitely check it out later on though.

The algorithm to determine how much a person's public tweet is worth may change as more users use it and more users click a bit.ly link. So it will be worth it to check it later down the road.

The crazy part is ted is almost giving away free trials or credits, just follow @spontwts. Just the other day they tweeted they will give you an extra $1000 if you join and deposit your first $1000, giving you $2000 to sponsor conversations on twitter.

Still waiting to get advertisers to my publisher account. So I can write a case study for that.