The past couple days even weeks I have been playing around with CPS via Facebook. I figured that I should start cashing in on the Halloween season and attempt to make some quick easy money via Facebook. I figured facebook would be easier, well I was wrong. I have  nice case study which you can look over and let me know your ideas.

I figured costumes, the target is everyone. I was wrong and def got me spending about 100$ every 5-7 minutes. SO I stopped those campaigns and re-thought my strategy because I can't type in the keywords "costumes" via facebook because it didn't even come up.

So I had to think of another way to target the demographics.

It took me a good day to figure this out.

This is how I started targeting. Since Facebook keywords are specific by interests, likes, music, shows, etc. I decided to target users by TV shows. For example, one of the costumes I was promoting via Facebook was Dexter costumes, so I targeted Dexter, the network it was on,and even some characters from the show. I got a good amount of users which I was kinda surprised.

The next thing I did was split test among age groups. This made it easy for me to see what age group produced the most clicks. Once I saw a good valid amount of clicks, I broke it down even more into their own ad group by age. So this way I can tell and see who are buying and where the majority of the clicks are coming from. 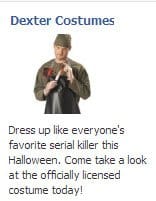 Here is the Dexter ad I was running. I kept it very simple and straight to the point, since that is what Facebook likes. Also it was very easy to get the ads approved because I was direct linking to the actual costume. So it was instantly approved.

I also had the word Halloween and Costume in the copy, so it emphasis that it is a costume and not a special on the TV show, since I was targeting by the TV show and the network. I wanted to make sure that the person clicking on the ad was looking at  costume.

I thought my CTR was good that I would see some conversions, don't think it works like that with CPS. So I was thinking what was going on between the click and the merchants website. With the clicks that is happening I basically stared at the set landing page for the costume and tried to figure out what would be wrong.

But as an affiliate there are limits on what we can do on the merchants LP, especially I think it is a e commerce style website.

Anyways here are my general stats before I started breaking them up even more. As you can see my CTR is fairly high for facebook .1 - .5. I know personally that those CTRs would be good for CPA offers.

I started off bidding high because I wanted to get the most clicks to see how costumes would work on Facebook, I wanted to make sure my ad was being shown on Facebook everywhere. This way I have data I can look at right away, I hate waiting for data. So I started my MAX CPC at .85 making sure I will be on top before anyone else targeting the interests I was targeting.

You can also see I had the impressions going in my favor. Also if you are looking at the age groups the younger crowd are the ones who were most active and the ones who click through to the ad, all males BTW.

Now I think I should have done a CPM model just because I was getting a high CTR. The reason why I didnt do it was I wasn't getting enough conversions or rarely any. But honestly now that I think about it while writing this post I should have done the CPM model as it would have been cheaper than CPC.

The basis of this even though it didn't convert very well I learned a lot by just split testing and spending money in a field I was not familiar with CPS on Facebook isn't my forte but I wouldn't mind doing it again since now I have a better understanding with CPS on Facebook. I know some people that just do CPS via Facebook and make a living.

Start small and then scale, but also spend a good amount where you have decent data to look at. I personally didn't spend that much but I have the data that helped me make the decisions I made to try to make this work in my favor.

Let me know what else you think I should have done, what other strategies I might have missed. What are your thoughts on this case study? Are you promoting Halloween costumes?

But all in all test and make the mistakes to learn!