Travel and Entrepreneurship with Rohail Rizvi in Bangkok, Thailand 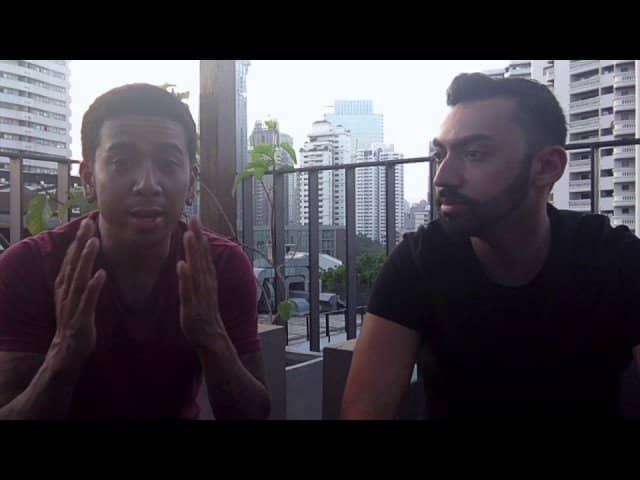 Ian Fernando:              Wad up, guys? Ian Fernando here from www.ianfernando.com; I've got a special guest this year and the best part is I actually had this kid while we were traveling in Columbia and we’re about to do this traveling entrepreneurship affiliate marketing how you travel all the time, so Rohal go ahead and introduce yourself.

Rohal Rizvi:                What's going on guys? It's Rohal here; some of you guys might know me I also go by suitcasemarketer.com; just a pleasure to be with Ian. We’re going to do a quick interview; talk about travel tips; just to being at digital nomad and just being an Internet marketer in 2016 and 2017 coming up.

Ian Fernando:              And we both of been traveling on and off for the past, I think, seven/ eight years while we have our online businesses as well. So as you know I'm an online entrepreneur, I have online advertising, I do the blogging. Rohal does the same thing advertising, buying ads through Facebook and I get a lot of questions about how I run my business while I'm overseas and it's pretty, pretty easy I just need a laptop; I need the Internet. What answers do you give everybody when they ask you the same thing?

Rohal Rizvi:                Yeah, that's the beauty of this business all you really need is a good Wi-Fi connection, your laptop and you’re good to go. I mean, it's unlike any other business in the world and it just provides the flexibility that everyone wants and dreams of so you can't ask for more.

Ian Fernando:              Good. So right now we’re actually in Bangkok, Thailand. We just came out of affiliate world of Asia and there's a lot of people just started out and they want to have this kind of freedom and when you're in this business you actually want to do this for freedom of time and not so more so for the money. A lot of people they say they want to do it for the money that's awesome, but you are fighting to have this time for yourself. So what kind of tip if somebody that's starting out and want to be free but can't be free at the same time.

Rohal Rizvi:                Right, I mean, exactly to touch on your points a lot of people work to live and some people live to work. There are people who are spending 100 dollars a week working but they never get to spend any of the money that they make because they just don't have the time so I believe that time is more valuable than money and this is why we do what we do because it allows us the flexibility and the freedom to do what we want to do and own our own time. So your question was, if anyone was trying to start this wondering how to get started you've got to take the leap, that's what I'll say. There is never going to be a perfect time to jump into this type of lifestyle. If you work at a job right know make a deliberate plan, have savings, think about how you're going to live for the next six months; but really dive in and see this as your new lifestyle. I mean, really make a dedication that you don't want to be stuck in the office cubicle anymore, you don't want to be doing the 9 to 5 anymore; you want to own your time and you want to own your freedom. So just -- you know, it might sound scary at first, you know, you're not going to have all the answers right away but just jump in. You are going to be scared, but just jump in any way and take that risk.

Ian Fernando:              I agree because I know when I first started out, you guys know my story, I had three jobs and just trying to get rid of at least two of them so I could just have one job. My goal was to have one job, not even have to be free I just wanted to have one job and eventually entrepreneurship or online marketing just came on to me by accident and that's how I've been able to get my time. So the best part is that when people say how do you spend time traveling and also trying to do online work. Well, what I do is -- right now we’re at a space called the Hive in Bangkok, Thailand and what I do is I wake up I want to leave my apartment, I want to leave the hotel and I want to actually go to work because the vibe in these types of office environment actually allows me to work; while other people they want to work on the beach or work in the hotel, like, how do you like to work while you're traveling?

Rohal Rizvi:                I mean, personally, I like to change it up, like, some days I'll come out here to the Hive with Ian and we'll grind it out and get a lot of work done; other days I'd rather just stay in the hotel do room service, get to work right away so it's more about how you're feeling and I personally like to change it up a lot, breaks up my days and it still feels like – coming out to place like this still feels like I'm taking advantage of being in Thailand I'm not just sitting inside in my room.

So it's a balancing out; but you definitely have to make a commitment to scheduling out your days otherwise you're always going to want to be doing touristy things, you're always want to be going out but you really want to push yourself while you're traveling to force yourself to put in those hours because ultimately it's a digital nomad lifestyle it's not just a vacation so you do want to work sometimes.

Ian Fernando:              Yeah, I totally agree with that because there are days we’re like I'll spend three or four days doing touristy stuff and I'm like “oh, shit! I need to work.” So yeah, that is right, you have to definitely schedule your time and make sure you've got time for your business and doing touristy stuff. Like, luckily for us we’re able to manage time much more easily just because we have more time. For people that probably have a job and trying to do the two week vacation, trying to schedule all the stuff in while trying to ignore the business online or side business online or whatever you still have to manage that, right.

Rohal Rizvi:                Yeah, that's the beauty of it you can actually break it up how you want it, like, it's more convenient. If there is something going on today or tomorrow you get to go out and do touristy things and then the next four days or three days you don't do anything but work so that's the advantage.

Ian Fernando:              Definitely balancing that. One of the things I know a lot of people they ask me like when you first start out when you make your first 5000 dollars a month or profit and you want to go out and go on vacation and you forget about the business. Like, how do you tell a successful beginner how to manage their time and also be successful?

Rohal Rizvi:                Yeah, I mean, it's crucial that once you start making money you don’t just go and waste it and then lose sight of your goals because you always want to keep increasing your goals and that's key, right? If you achieve a goal and you become complacent you're going to go back to square one that's just how it is and we've been doing this for eight years plus and it's like we’re continuously pushing ourselves to be better than we were before, that's why we're still in this industry.

Ian Fernando:              And we’re actually very fortunate, we’re very lucky that we’re one of the very few or two of the very few that survive; where as I've seen in this industry where I’ve known a lot of affiliates and you don't even see them anymore

Ian Fernando:              You have to be able to -- don't get too excited because I was excited when I first started when I first made my first thousand dollars profit; I felt like I was on top of the world and that was the biggest mistake. And then now, I've been more humble, I'm wearing simple clothing now. The only expensive thing I'm wearing right now is my Louis belt and that's it.

So for people out there who don't want to really, really get out there and get time instead of money then you have to like Rohal said not to be complacent you have to keep on going because this industry will change a lot, marketing business will change a lot and believe me 2016 was one of my not so good years but, you know, I have to push through it. So what's one of your advice for 2017?

Rohail Rizvi:         I mean, 2017 a lot of things are changing faster than anybody really expected so you have to stay on top of it, you got to keep on the ball and keep innovating. You can't expect something that's working right now to be working next year; but you've got to be positive because there's lots of things coming in too. It's becoming a lot easier to advertise in terms of targeting and reach. You can literally target exactly the type of person you're looking for in any marketing campaign you know, these ads are getting way more advanced so just look for things like that to really educate yourself on the new features that keep coming out and the new possibilities that are there.

A lot of people say it's getting more challenging but to me actually it's getting a little bit more easier as well because the tools that exist now to be able to reach the right audience did not exist five years ago; you didn't have these algorithms that are finding people for you so it's like that. And as far as travel 2017, it's going to be a big year as well; there is a lot of conferences going on. This is my second time now in Thailand. I just hit 35 countries and I don't know, next year I want to do a lot more. It's a travel bug and once you start doing it there is no end to it.

So 2017, travel also is an exciting space because it's getting a lot easier for people to book flights and [cross talking] there is excursions and retreats. Tomorrow I'm going to [inaudible] for a living retreat [inaudible] juices and all kinds of crazy stuff. So I encourage everyone to get out there and work and travel and try to get it all done as much as you can't next year.

Ian Fernando:              Yeah, I agree with that. So catch us. If you haven't seen our other interviews which is actually pretty good on my YouTube channel. We did one in Columbia and there was a lot of Q&A. That was a really, really good one. So good luck to everybody in 2017. Hopefully, hopefully I'll see you on Roof Deck we’re doing an interview and I'll be going to Vietnam tomorrow; actually, me and Rohal have the same flight he's going to [inaudible] I’ll be in Vietnam and maybe we'll do a live Q&A.