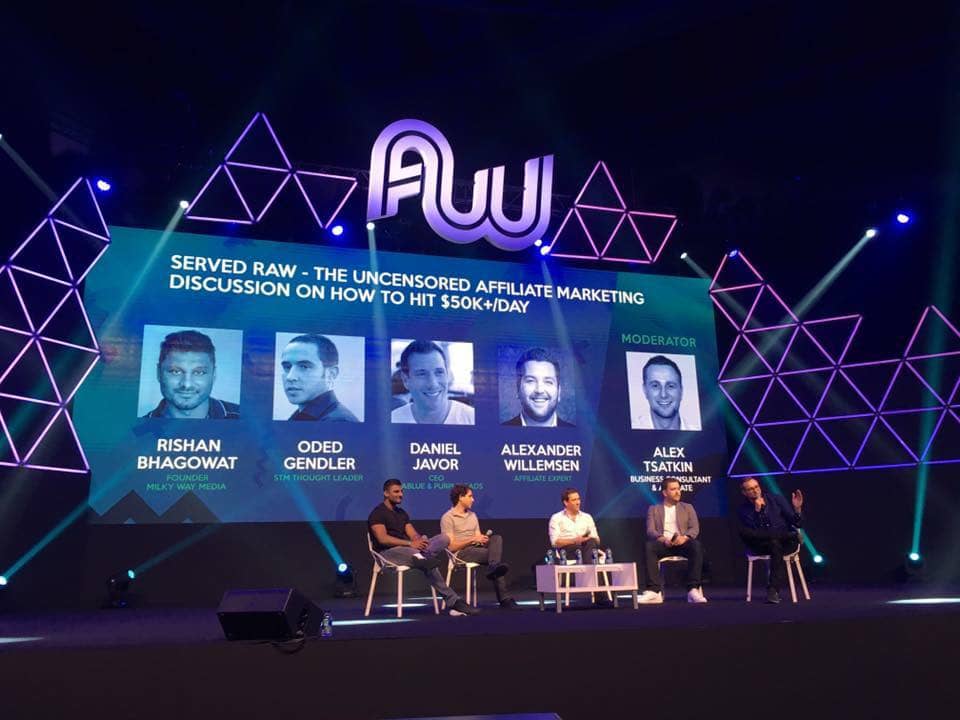 It has been a year since the first Affiliate World Asia has been established in 2015. Now I didn't attend Affiliate World Europe in Berlin but I have attended once more AWA - Bangkok, Thailand.

This show is just impressive, as a true affiliate marketer, they are testing a new layout. Last year layout in Thailand was solid but with more open seats at the stage than what to do with. What about the over packed marketplace with just I think 10 vendors!

As marketers, we test from what I saw when I walked into this year event, a new layout with space! Lorenzo, Jordan I am assuming you are testing the new layout this year and it works. I want to say last year, they did the typical standard fixed layout and everything had to be in its place.

... but the Stack that Money Team decided to test!

Last year, as their first Affiliate Word Conference, marketplace was held outside the speaker sessions. This year, Lorenzo decided to put it all in one area. Leaving the outside room to be available for more massage chairs and private meeting booths.

When you walk into the show, the show is greeting you with their HUGE Affiliate World Logo and you are in the marketplace. In the back are 2 stages, one for the live speakers with limited seating and another stage for overflow and the speakers are then streamed to the other stage. Though the other stage is smaller, it is meant to capture late stragglers and just watch the speaker stream. I didn't like it much as I didn't get to see their power point presentation, but I understand why it was there.

Great #affiliateconference to be at. Safe flight all. Great to have met everyone! Until next time! #affiliatemarketing #affiliateworldasia #entrepreneurship #timetogrind

The main stage is where the amazing content is held at. It is a less fancy but still an impressive stage. It had limited seating and I assume this was done on purpose to cater to the actual attendee numbers of the conference with a base % not showing because of meetings, lunch outings, marketplace floor walking, etc. In the end the main stage is always usually filled.

The marketplace was open and divided pretty well into categories and not into just random booths. This made it easier to just see who I wanted to talk to. At least that is what it seemed to me, with two food stations to get a snack and drinks.

I enjoyed the open space a lot. It just gave everyone the ability to talk and network right on the floor instead of being forced to continue to walk up and down the aisle like traditional conferences.

Marketers are always testing, and I assume this is what the guys at Affiliate World did, tested a new lander in the form of conference, thumbs up!

Now the content, it was on point. The content at this event is not just looking at agency or thought leaders in general. It is thought leaders in the space that we already know. For example, it will not be a speaker from an ad agency that has 100 clients, but a speaker that has been in this game for a while and grew their business over time who use to be an affiliate.

There is a big difference in content from a person who thinks vs from someone who has failed and done it. Neil Patel of course was one person that had a ton of amazing content he preached and I was just like damn that is smart!

Another is my buddy Drew Canole and he has a great brand marketing content especially with Youtube. The panels were also amazing with cross over content and just criticizing others or their remarks.

These speakers are not the typical speakers you see at conferences, I can't describe in fully why but I know most of them on stage and where they came from and I think that makes them different. A speaker on behalf of a business vs a speaker that has their own business serves up different content and quality content for sure.

It was a vast amount of content as well, I didn't go to all of it but I was able to catch the ones that were of def high value. I am pretty sure the content will be posted on Stack that Money forum for their members to watch!

Affiliate World has been an amazing experience so far. They are now prepping for Affiliate World Europe, though I will not be able to attend this one - the conference is still a must to go especially if you are in the area.