Now I can’t talk about all the goodies (NDA signed) I learned. All I can say this tightly knitted networking event was beneficial and extremely fun. It was literally a vacation because it felt like one. Since I am expanding my online business, networking with different forms of online marketers opened eyes for me. All in all, dk did an amazing job keeping us entertained and focus on the goal.

The goal is basically to help each other make more money and then help the world! Great concept dk!!

I wasn’t even going to attend this ThinkTank because I am busy with other things and then I have to go to Miami in 5 days from now for Performance Marketing Expo. I was also talking to other people in the affiliate industry about ThinkTank. So last minute I decided to stop some campaigns and go to ThinkTank in San Diego. 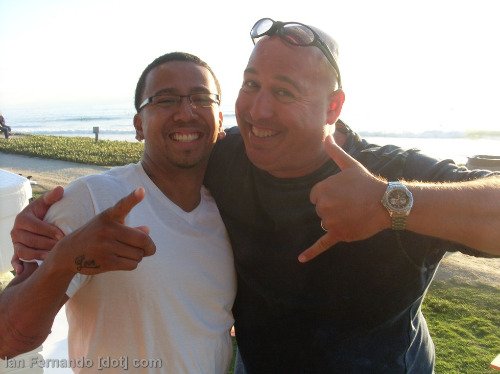 The cab ride was a bit long 30 mins, but when I arrived I was introduced to the ocean and a nice scenery park. I was there a day early and hanged out with John Hasson and Steve Poland. Nothing started till the next day, so we all decided to hit some people up and hangout.

This event is a really close tight niche of people that are making money online and know what they are doing. Prior to ThinkTank I was talking to some good friends of mine that had went last year and they gave me their feedback. I was very hesitant in going since, to me dk’s ThinkTank was more about online entrepreneurs and not affiliates.

When I actually started to interact with users, I found some very useful people that can benefit my own business. I even met some affiliates and an ad network. So it did benefit me in multiple ways. Also, since I am expanding my online portfolio – this event proved very beneficial and got some great ideas about my upcoming projects, which I can’t talk about.

While I also gave advice, I received a lot of it as well.

You can think of it as a Free Mason underground society but with internet marketers that is well verse in what they do. There was a great deal of talent at ThnkTank, alot! Wish I can go into some things these guys said, but can’t.

But the day didn’t consist of just sitting around and talking to each other, dk had a lot of great things planned for us. For example I learned to surf, which was my first time. One the side note, John Chow caught me and Jonathan Volk on camera while we surfed and even tumbled, well Volk most of the time.

Other days it was Muy Thai and Jujitsu with MMA fighter Robert Drysdale. In between we had amazing breakfast and lunches and at night entertainment with dancers and mexican amusements. After that night it was ballin’ with some of the other marketers at bars/clubs. It was literally a day filled with activities with networking in between. As you can see below, I am trying to take Robert Drysdale down!!

dk really did a great job at preparing such an event filled with knowledge. He even made sure that you were taken care of, I almost felt pampered! Girls would feed us and take our plates away, open bar all day, prizes, nerf battles, dodge ball, just a lot of stuff filled for the full day!

Even though majority were not affiliates/publishers, I was able to utilize someone to help with my business and even future ideas. Networking is about how you can utilize and leverage one another ot benefit both parties, plus creating a lasting relationship. It was a great day filled with fun.

I networked with amazing people that were more open to sharing insights than any other event I have been to. Since it was more of a closed event, everyone knew something about marketing – I actually had a great discussion about advertising with someone!

It is too bad I can not go into detail about stuff I learned because there are some really cool stuff I got out of it.

Here is an overview video…

[youtube]http://www.youtube.com/watch?v=nKE1mY4d96M[/youtube]
Sorry, I turned comments off - Read Why - Send Me a Message Instead