While I was at adtech NY 2012, one of the keynote presentations I went to discussed about Google+. An interesting tool they talked about was about ripples. It was an interesting concept to see who is an influence in the social space but just for Google+. After the trade show, I went home interested to see how this system worked. I did some research and started reading about ripples on the Google Blog.

Ripples got me a bit curious about how it works and who are the true social influencers. Te only problem I see and my buddy Ad Hustler brought it up at adtech is assuming everyone using Google+, which isn't true. You still have the social battle between Facebook and Twitter. Google+ is just getting into the social game and so far a lot of people are using it.

I have yet to find a purpose for Google+

The idea with Google+ Ripples is to see who is influential. Take a look at this screenshot below. Within my Google+ profile I saw users commenting and re-sharing one of Brian Clarks links. Infact, it was a link which he reshared from I assume someone he follows. From this screenshot below you can see that Brian shared a piece of web content to users, to which another user decides to reshare it. (the bigger circle sticking out on the lower right hand) This Louise person has enough influence that it affected another person. 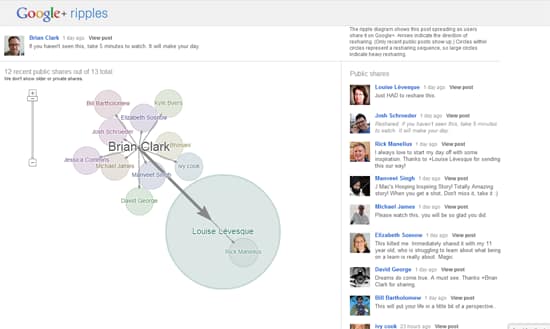 It was interesting to see who are viewed as a trust figure and an authority. For someone to look at their content and reshare it and influence them is a pretty strong attribute in the social space. Let's take a look at another image or someone more figurative, the Dalai Lama. This image below shows his influence on so many users, which in turns show up other trust worthy users.

The Dalai Lama, has influence so many users, of those users another set of users influence another set. One being a pretty big worthy user to trust. These circle within a circle definitely show who can be influenced and who is the influencer in this specific social media vertical. 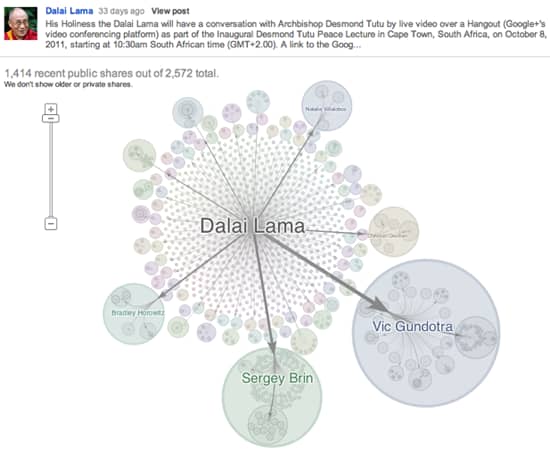 Ripples doesn't just help you find who your top social users are, but it also provides stats about the audience. You can see some audience statistics like language, giving you an idea who the demographic users are. Another is the chain reaction, basically what i was explaining above. Not only can you see who are the top re sharers, you can see how often it was shared per hour.

Google+ Ripples can help you start creating relationships with users that can help your business. Imagine if one of your content had a high chain reaction or ripple effect to others out there. It can be compared to Twitter retweets, how often ca you get your content retweeted and reshared? If you start creating relationships with your top influencers, you can captivate a big audience in a short amount of time. Also its free traffic.

I found this Google+ Ripple to be very interesting. Even though Google+ does not have a huge audience just yet. I personally haven't notice internet marketers using Google+. There isn't any apps, downloads, tools, even ebooks towards Google+. This shows me it still has a long way to go before it can compete with Twitter and Facebook. Though ripples is definitely a great way tot get in touch and create relationship with highly prized authorities in any niche, just how many authority figures are actively on Google+.

Ripples is definitely something to keep an eye out for, it is helping you find out who can boost your traffic to your blog or products pretty rapidly.