The second day of Affiliate Summit turned out to be a real busy day for me. I had meetings and interviews back to back. My feet are hurting...!

So I started off to the blog room to write the post you read yesterday. After that, I went off to listen to the keynote by Dr. Robert Cialdini. His keynote was very informative and had a lot of good things to improve your business. The keynote was base off using words and the pschology of using scarcity, emotions, etc.

I really enjoyed the keynote and was also surprised at the stats he provided with his casee studies. It is definitely something I am going to implement and read on. I know words can affect someone's emotion and decision but changing ONE word or flipping a statement can have a huge effect on conversions, especially in our industry. 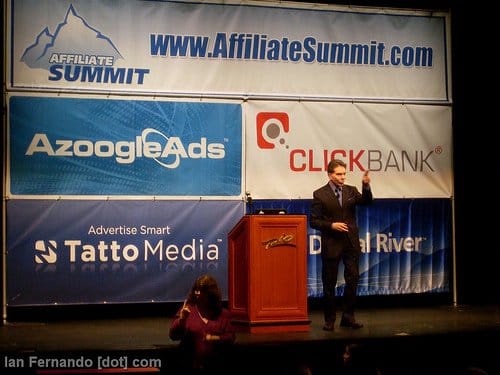 I did a double walk to make sure I wasn't missing any but it def seemed smalled than the past Affiliate Summit in the past. I went and stop at a couple of the booths that I wanted to see. I also stopped to talk to some of the networks and said hi to my current affiliate managers.

The floor also seemed compacted... take a look what did you think?

During the day I had an interview with Relevantly Speaking and then I had lunch with a new Affiliate network called CPA Fuel. The lunch was very good since we had it at PF Changs at the Wynn. Good Stuff.

We discussed their network and talked about the industry a bit as well as any questions I had or they had, overall a good lunch.

After lunch I headed back to the mile long walk of the RIO convention and went back to the exhibit hall and visited the Convert2Media booth. It's always great to talk to Ruck and Steve and their whole team. Smaxor from Ads4Dough was there as well and we all just chilt.

After just visiting the booths and talking to a lot of people I just went back to the room to relax a little and rest my tiring feet.

Then the night started....

...with the Bloosky/Meetup202 event. I met up with Matt and Ryan and just hanged out while everyone started to filter in. It was an amazing event.

The event was very successful as more and more people poured into the event, more and more people networked. While at the event Wes Mahler spoke about the Bloosky acquisition and it affected the current Tracking202 system. Wes and Bloosky mad things much clearer for the affiliates of the industry.

Towards the end they asked me to speak about a quick 5 minute marketing tip. I basically ask the audience what they wanted to hear, polled their results, and just winged the information I gave them. Got a lot of great feedback. Thanks for Tracking202 and Bloosky for allowing me to speak.

After the Bloosky event I headed over to my boy Fraser party, Mundo Media and met up with more affiliates in the industry. I met up with my man Chad from CDFNetworks and we chatted and talked business. The party was a huge success and one of the better parties I think. They had a bowling alley in the suite, now that's gangsta!

Some interesting stuff happened at Mundo Party, let says some people just can't handle their drinks. Mundo had a pool table, women dancing, and all my affiliate friends.

After Mundo there were other parties that was happening and I decided to head up to CX Digital party to say whats up to my AM Mike. They had some crazy acrobatic stuff going on. Ladies dancing with snakes, swinging ladies from this suspension bridge thingy... interesting stuff.

After CX I headed to the Clickbooth Party at the Hangover Suite. It was interesting... I mean I held the chicken...

I was hella tired, I met a Jersey stripper at the party and def had a great time talking to Eric, James, David, Kris, and Brittany (which she gave me a hangover patch cause I was drinking way too much.

After Clickbooth I was hella tired and just took a taxi to the RIO with Logan.